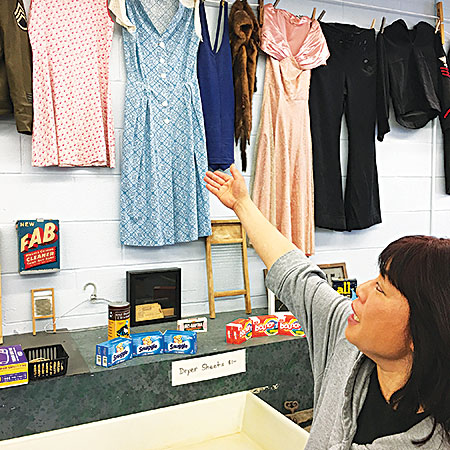 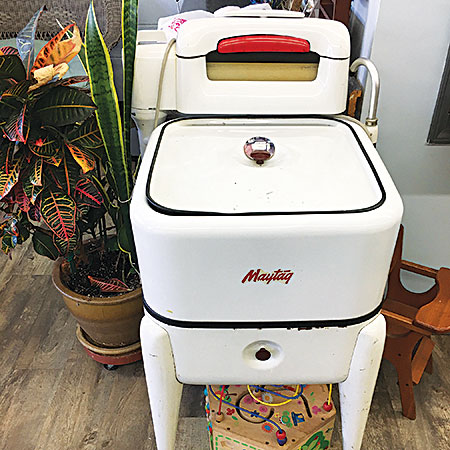 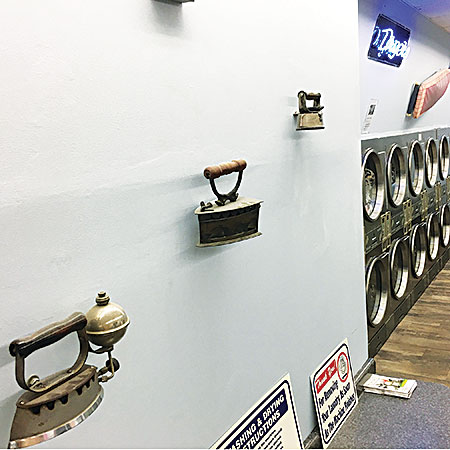 POUGHKEEPSIE, N.Y. — If you thought the owner of a local coin-op named We’ve Got Your Sock Laundromat would just tack up an assortment of mismatched knits and call it a day, then you’ve never met Poughkeepsie’s own Suzy Kee. Her one-of-a-kind clothesline timeline showcasing 140 years of Americana will really knock your socks off.

From a pre-Civil War hand-sown silk gown to a ’70s micro-mini ensemble affectionately referred to as “Marcia, Marcia, Marcia!”, Kee pays tribute to the changing face of fashion with an impressive lineup of vintage garments pinned to a dual-cord clothesline draped above the mirror finish of stainless steel classic Gen 4 and Gen 5 Wascomats.

“I thought it would be really neat to hang up clothing, but not just anyone’s, because that’s kind of banal. So, the creativity came out if I hung out period clothing,” Kee explains. “I was looking for specific styles that screamed out a certain period.”

Kee, who attends the coin-op every day except two holidays when the laundry is closed, has built trade by caring for the loads and the people crossing her threshold.

She once taught in New York public education, including grade schools near the infamous Fort Apache The Bronx police precinct as well as Roosevelt Island. Eight years ago, after a quarter-century in front of the chalkboard, she became disillusioned with a system that placed a greater emphasis on standardized test scores than fostering creativity in young minds. She left teaching to seek a new outlet for her skills.

Both sets of Kee’s grandparents were involved in the garment care industry decades ago, with one operating a Chinese hand laundry and the other a dry cleaner. Pursuing ownership of a coin-op satisfied what she was yearning.

“This was a way to reconnect with them on some level. Through this place or through me, it feels like part of them is still around,” she shares. “With a laundry, I could find some meaning in the work I did and be social at the same time.”

After cold-calling 65 coin laundries within an hour’s drive of her home, Kee eventually caught wind of a motivated owner looking to sell a neglected 1,800-square-foot, partially attended store along New York State Route 55 east of the Hudson River in neighboring Dutchess County.

Kee rolled up her sleeves to remove years of grit and grime from washers, and invested in new dryer tumblers, bright lighting fixtures and flooring.

The novice operator sought customer feedback and catered to their requests for complimentary Wi-Fi and monthly magazine subscriptions. She encouraged store reviews and framed them. When the volume of handwritten letters exceeded available wall space, she bound them in a scrapbook that rests today at the counter.

With the place spruced up, attention turned to the décor, which “needed a woman’s touch.” A large-scale whimsical take on socks, in keeping with the store’s namesake, was considered by Kee at one point to replace a tattered cityscape wall mural, but later nixed following completion of a small framed collection in the lounge area.

Orchestrating a clothing timeline popped into her head during the middle of the night. The former educator soon proceeded to read up on period clothing, research museum exhibitions, and study the work of photo archivists to ensure her project would make the grade. While visits to antique outlets were a dead end, she hit pay dirt online at eBay and Etsy.

“I knew what I wanted and didn’t stop looking until I found it,” the owner recalls. After 12 months and a $3,000 shopping spree, the gallery was unveiled.

Anchored by pulleys at each end and reinforced with decorative wooden supports, the 70-foot clothesline was fitted with over 40 men’s and women’s garments, offering a glimpse of fashion trends from the 1840s to the 1980s.

Kee walks you through the hanging exhibition like a seasoned museum guide, offering up vivid descriptions and anecdotes along the way. Her knowledge of each piece — from the intricate detail of Edwardian era hand-crocheted lace to the tailored styles of men’s dress wear of the same period — turns wash day into a learning experience.

None of the pieces are encased in plastic bags or glass cases so as to retain the visual impact of an authentic hanging clothesline.

“There was a trade-off there that I was willing to make,” Kee notes, emphasizing that the store is climate-controlled year-round and boasts a dehumidifier.

Laundering or dry-cleaning the articles to remove any accumulation of lint is out of the question. She recalls removing a loose thread from the oldest item that immediately disintegrated between her fingers. Today, only a feather duster is employed to maintain the collection.

The tribute to fashion has garnered local press but yielded no measurable effect on revenue after one year in, Kee admits.

“I don’t feel it’s affected the bottom line. It’s just an outlet for my creativity, and if it makes the place more welcoming, that’s all the better. I really want a homey environment because I spend more hours here than I do at home.”

Kee had ambitions to carry the timeline into the 21st century but ran out of clothesline space, allotting the last pins to a Who concert T-shirt.

“I wanted to end at the current times and would have had a pair of yoga pants and a Victoria’s Secret thong,” she quips.

Response to the unorthodox clothesline collection depends on which way the wind blows.

“The reaction is threefold: 1) ‘That’s really cool!’ 2) ‘Can I borrow that poodle skirt for a costume party? and 3) ‘Is this clothing that people left behind?’ That last one befuddles me,” the owner remarks.

Kee is quick to add that a retired college professor who taught subject matter on period costuming praised her work: “She told me I hit every era on the head.”

As she talks, Kee circles back to her main worktable and glances up at a simple, patterned feed-sack dress, admiring the resourcefulness of farm women of the 1920s who used creativity to transform a humble bag into something attractive.

Heading out on the road, I took comfort in knowing that same spirit is alive and well inside a Poughkeepsie laundry.