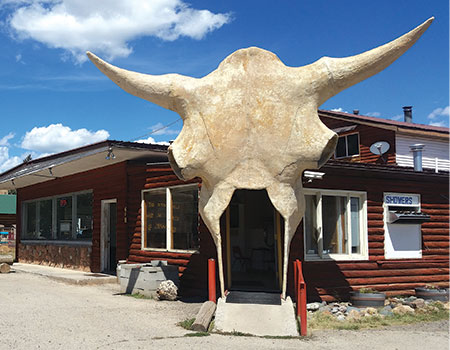 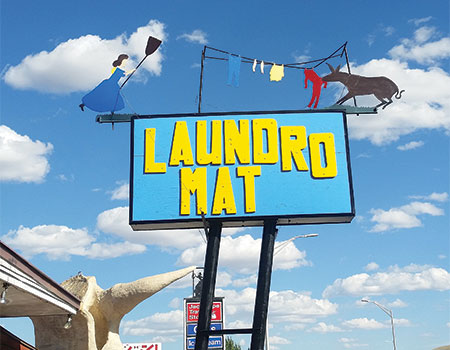 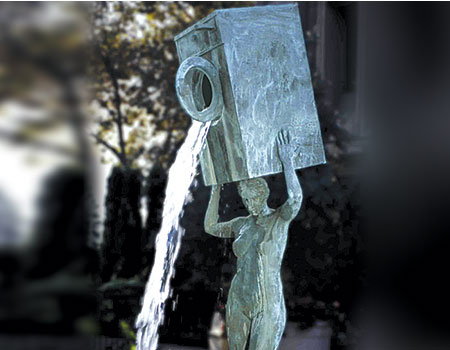 Coin laundry sights and sounds that will make you go, ‘Huh?’

CHICAGO — Coin laundry is mostly cut and dried when it comes to wash and dry. But there’s an unconventional side to this otherwise conventional business. Let’s take a walk on the wild side and you can ponder some of the industry’s head-scratchers.

Stepping into a coin-op can be so humdrum. Not in Dubois, Wyo., where getting to the machines is a once-in-a-lifetime experience. Customers of this frontier town laundry tote their baskets through the nasal passageway of a giant buffalo skull.

Patrons can opt to take the door closest to the highway of the Dubois Laundromat, but surely any self-respecting cowboy or cowgirl would want to make their way to the washers by passing under the 15-foot-tall fiberglass skull to commence the chore.

The sculpture was created back in 1982 by local artist and businessman Vic Lemmon, who wanted to add some architectural flair to his Grub ’n Tub restaurant/coin-op combo located in this outpost of 1,000 residents known for its Old West storefronts. When he moved the operation across the road to enlarge the laundry’s footprint, the big skull was transplanted along with the machinery.

For the past decade and a half, Chuck Bryant has held the reins of the horned coin-op and witnessed his fair share of skull-inspired selfies. Although many shoot the buffalo on their phone and then hoof it, Bryant ropes others in with an attractive trio of self-service offerings: laundry, showers and car wash.

Dubois Laundromat’s 2,500-square-foot building houses a modern array of 20 washers and 19 dryer tumblers, along with three coin-op shower rooms vending for 50 cents a minute using quarters or dollar coins. One of the three rooms is ADA-accessible.

The twin car-wash bays off to the building’s side — like the laundry and showers — see an uptick in trade during the summer months: “A week in July is like all of February,” says Bryant, adding that last year’s solar eclipse made for an even more prosperous high season.

Dubois, which is an hour’s scenic drive from Yellowstone and Grand Teton National Park, was one of the focal points of Google’s Eclipse Megamovie 2017 project, attracting enthusiasts from far and wide. Days after the astronomical event, Bryant had hikers come down from the mountaintops to wash clothes and shower up.

He admits that while the towering skull entry attracts eyes, the majority of traffic comes through the door facing the main highway. There, patrons pull up to the building, bypass the buffalo, and make a beeline to the machines.

The secondary entry is not without its own character, as another of Lemmon’s creations — a whimsical metal sign depicting a housewife shooing away a mule from her laundry clothesline — gives the Dubois Laundromat that one-of-a-kind artistic touch rarely seen in cosmopolitan settings.

Bryant says he was approached by a buyer looking to get his hands on the faux buffalo head, an offer he turned down: “I couldn’t imagine the place without it.”

BEAUTY OF A GEN 4

The Wascomat Generation 4 washer-extractor, one of the machines that helped usher in the era of today’s front-load-dominated stores, is truly a work of art in the northern California city of Palo Alto.

Tucked away in a quiet, unassuming park setting, sculptor Brian Goggin raised the washer to new heights by having his nude bronze statute hoist it above her head and throwing open the loading door so water would cascade out into the decorative public fountain below.

This is by no means meant to symbolize an enraged customer with the laundry day blues. According to the artist’s website, the Hellenistic female’s heroic lifting of the washer is part of an “ongoing dialogue” with two bronze warriors standing guard nearby. Goggin writes that “through imagination, dreams and memory, we replace or fill in for unknown or forgotten events, experiences, characters and objects with anachronisms.”

Goggin’s 12-foot-tall Body of Urban Myth was commissioned by the Palo Alto Arts Commission and Sheridan Plaza, where it has been flowing an imaginative stream for the past two decades.

Coming in Thursday’s conclusion: Meet Betty the Washwoman and admire a rooftop Studebaker