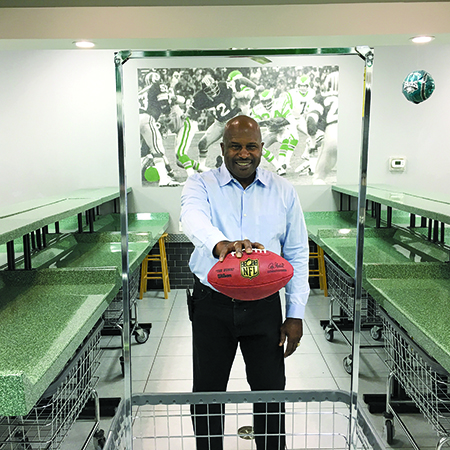 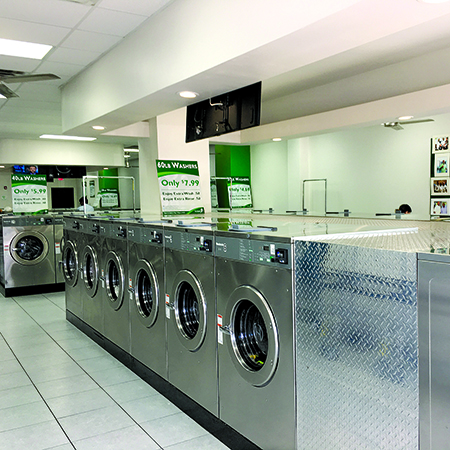 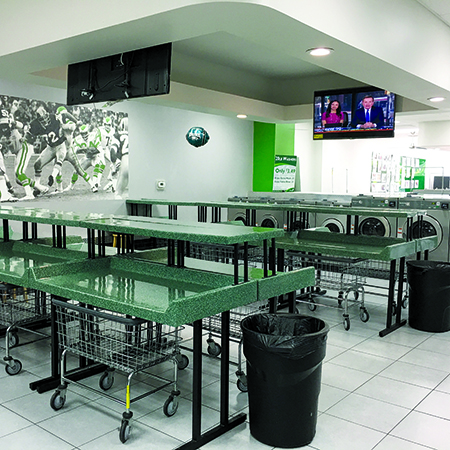 PHILADELPHIA — James Betterson is on the move inside his North Philly laundry whether he’s there or not. Patrons tackling their weekly wash come face-to-face with the former NFL player barreling through a hole in the Washington Redskins defense, seemingly heading right toward them as they finish loads in the centralized folding area.

The giant wall poster is more than a throwback to his playing days some 40 years ago. For this retired Philadelphia Eagle running back and kick return specialist, putting his best foot forward is still in play at BetterClean Laundry.

Betterson, who hung up his cleats in 1978, pivoted into laundry two years ago with the rejuvenation of a 3,400-square-foot store in The City of Brotherly Love. Gone is the I formation, traded in for a T formation of 41 washers and 44 dryer pockets. BetterClean is more than a play on the operator’s name and much more than a football-themed laundry. It’s all about upping the game for a once-dilapidated location by sporting a one-of-a-kind décor along with some good ol’ Southern hospitality.

“I had one of my competitors tell me, “James, women don’t like football. You can’t market yourself with all this football stuff. Nobody cares about that,’” the 63-year-old owner relates as we settle into a pair of Eagle-inspired green seats just a few yards from the store’s centerpiece poster mural. “Another told me I should just be showing games. I’m trying to go right down the middle; try to use it, but not overdo it.”

There’s no mistaking you’re in Eagles territory doing wash at BetterClean. Kelly green and gray abound, tying in well with the laundry’s equipment branding. The store logo, featuring a fleet-footed Number 34, stands above the storefront and is carried tastefully throughout the venue.

Gridiron, yes. But at BetterClean, it’s the iron on the floor that takes center stage.

“I didn’t want this to be a shrine to me. I thought that one action shot would be nice,” Betterson says, pointing to the black-and-white poster photoshopped with green highlighting. “I think it’s an interesting brand. If you’ve got that experience, why not mention it.”

Before turning pro, Betterson was a standout athlete at the University of North Carolina along with Mike Voight, now deceased. The two running backs shuttled in offensive plays while racking up yards — the first NCAA players to alternate the position and each gain 1,000 yards in a season.

As a senior, Betterson was named Sports Illustrated National Back of the Week after rushing 134 yards, scoring three touchdowns and picking up 92 yards on kickoff returns.

“Those were very special times,” the former Tar Heel recalls, noting that he played varsity three years and “got to experience running into a stadium with 40,000 to 50,000 fans screaming” as a young sophomore.

It was in college that he earned the nickname “Boom Boom,” bestowed upon him by Assistant Coach Ricky Packard. “In 20 yards, I could really give you a quick burst. He came up with ‘Boom boom, he’s gone.’”

Originally drafted by the Denver Broncos, Betterson signed with the Eagles in 1977 as as a free agent, joining 16 other new players on the roster, including fellow running back Wilbert Montgomery and quarterback Ron Jaworski. He played 23 games over two seasons, compiling offensive and special teams yardage, before retiring.

The time on the field prepared Betterson for a sales career and, most recently, laundry ownership.

“You’ve got to put in a lot of hard work, start early, be prepared to stay late, and play if you’re hurting,” he shares. “Football taught me a strong work ethic.”

GETTING THE WORD OUT

“The machines do the work and don’t call in sick,” he says of the industry’s appeal. He considered the New York and Florida markets, but soon focused on Philly to be close to some family.

His inquiries brought him into contact with veteran Philadelphia laundry operator Larry Vladimir, who also represents a local equipment distributorship. When he paid a visit to Vladimir’s store located north of the city center, the ex-running back stopped in his tracks.

“I was infatuated,” Betterson shares. “It was bright, airy and colorful. I never saw a laundry like that.”

He was soon introduced to a location on Oxford Avenue that was ripe for revitalization.

“It was being mismanaged and run down,” he remembers. “I thought all I had to do was come in and bring it up to today’s standards.”

The rehab was the easy part for the entrepreneur, who had a good track record turning around a few rental properties. Getting word out to the community and bringing back trade has proven a more daunting task. Before being transformed into BetterClean, one out of three machines at the store was inoperable, according to Betterson.

“It was an eyesore,” he recalls. “I wouldn’t even do laundry here. It was depressing.”

Traditional media — cable TV, print and door hangers — didn’t deliver the expected bang for his buck. Word-of-mouth advertising and referrals is now doing the job, according to the owner, carrying the store on an upward trajectory. Distributing flyers outside the neighboring Shop Rite grocery anchor has proven one of the best vehicles to acquaint neighborhood residents with the new operation and management.

While Betterson has sought assistance from marketing companies to create awareness campaigns, he is getting up to speed on effective social media techniques through coursework.

Sponsoring Little League baseball scholarships, speaking at local schools, and reaching out to a local homeless shelter have increased BetterClean’s visibility in the community, the operator notes. He’s also been known to give out roses on Mother’s Day and candy treats on Easter weekend.

Sharon Sager, owner of the Sierra Madre (Calif.) Laundry, describes her store's 24/7 operation and talks about what's needed to see that self-service laundries are running smoothly any time of the day.