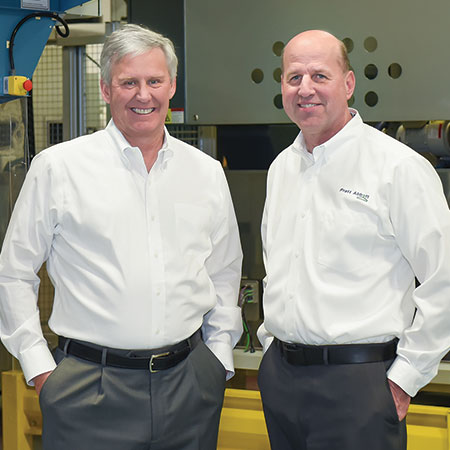 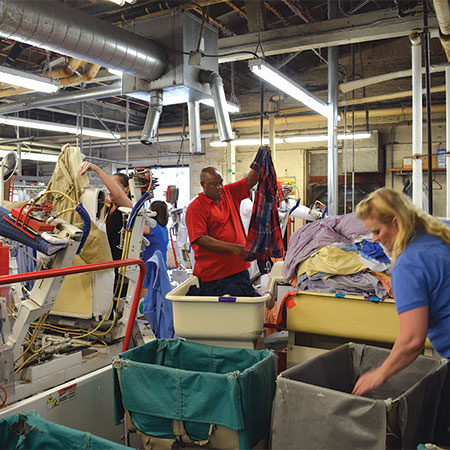 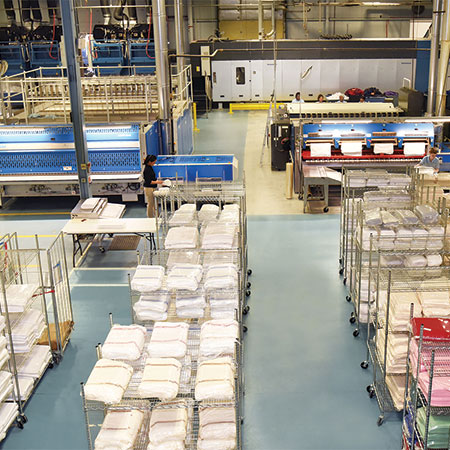 “One of the reasons we have all three business sectors is to provide volume to afford a management infrastructure which allows our employees growth opportunities,” says David Machesney. The other, he maintains, is because providing “everything clean” simplifies life for customers.

Pratt Abbott was founded as a solitary drycleaning store in 1944, in Portland, Maine, according to Machesney.

“Elliott Abbott led the business for 14 years, often waiting on customers and pressing shirts himself,” he says. “In the 1940s, he combated unemployment by hiring veterans through the GI Bill.”

Among those hires was WWII veteran Roderick Lowell, who worked his way from the shirt presses to ownership in 1958. Lowell and his daughters staffed the counters, while Lowell’s father repaired and maintained machinery, according to Machesney. During the 1960s, Lowell opened additional drycleaning locations and expanded into uniform rental.

Since acquiring Pratt Abbott in 1991, the Machesney family — children and grandchildren — have worked the counters as well. After Jim passed away in 2015, David took the lead. He’s since significantly grown each of Pratt Abbott’s business segments — dry cleaning, vended laundry and linen/uniform rental — benefiting employees and customers alike.

A LOOK AT OPERATIONS

Pratt Abbott’s vended laundry sector significantly contributes to the success of the company as a whole, contributing more profit than dry cleaning, according to Machesney. In many ways, the two intertwine. This is partly because most Pratt Abbott vended laundries and drycleaning stores are located side-by-side. This configuration draws revenue from a broader demographic, creates shared operational savings, and encourages consumer crossover.

“We look at it as a convenience to the customer and a way to serve more customers,” says Machesney. “Co-mingling also allows us to run fully attended laundries and offset some of the labor cost from drycleaning revenue.”

Thus, the vended laundries tend to make the drycleaning stores more profitable — and vice versa. Even better? The pairing creates “one-stop-shop” customer convenience. That’s important, according to Machesney, because Pratt Abbott “is in the business of selling time.”

Uniform and linen rental — the most profitable Pratt Abbott business sector — began in the 1970s, but only recently ballooned in performance.

“Back in 2000, we bet the uniform and linen rental business had more potential for growth than dry cleaning based on the demographics of our area and the lack of population growth,” he says. “We broke the uniform and linen rental sector away from dry cleaning and formed a separate company to focus on it. We knew we needed to develop separate production plants and teams for both.”

Today, operating from a new, state-of-the-art commercial laundry plant, Pratt Abbott Uniform & Linen serves healthcare and hospitality clients within a 250-mile area. Making up a robust 58% of total company revenue, the business provides pickup and delivery of cleaned and leased garments and linens. During the last 12 months, it has realized double-digit growth, according to Machesney. Thanks to the new plant’s size and equipment mix, he expects that growth rate to continue for the next two to five years.