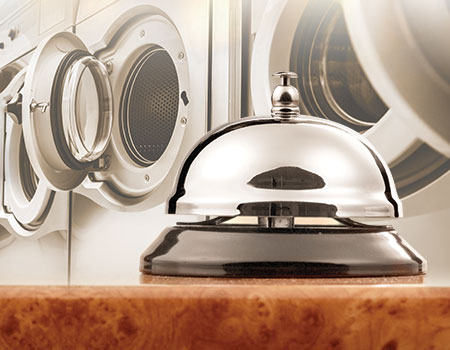 CHICAGO — Why does someone choose to use a certain Laundromat? Is it because it’s safe and secure, it’s clean, it has enough machines available? What about being close to home, with hours that fit their schedule, and offering sufficient parking? Where does vend price, or the availability of large-capacity equipment, or having an attendant on duty figure into the equation?

Actually, all of these factors might play a role in helping a customer decide where to clean their clothes. But what if the factors they find most important—say, machine availability, vend price and convenience, for example—are virtually equal between Laundry A and Laundry B? How does a customer choose then?

In cases like these, the manner in which they are served at A and B often becomes the tiebreaker. That’s right—it comes down to customer service.

And popular online review platforms like Yelp, Google and Facebook have placed even greater pressure on store owners to keep patrons happy or risk having their reputation sullied by an angry or disgruntled customer—whether the criticism is deserved or not.

American Coin-Op interviewed several store owners from around the country recently to learn how they go about providing customer service worthy of receiving a good review.

Machines sometimes malfunction. Cards are lost or stolen. Clothes don’t seem to be as clean as the last time they were washed in the store. During times like these, when a customer becomes dissatisfied, the way in which a store responds to its “mistakes”—whether real or imagined by the customer—can say a lot about the business.

“It’s huge,” says Ken Barrett, owner of three Washin stores in Alabama. “Whether the mistake is real or imaginary, it’s a mistake on your part in your business.”

“I think it says everything about a business,” believes Glen Sheeley, who owns and operates Wash Co., a new Laundromat and car wash in New York state, with his parents. “I had one today.”

He explains that a woman reported she lost her laundry card and her cell phone in the store. Sheeley easily assisted her with another card but she was still upset about the missing phone and asked if he could review his security camera footage.

“It was super busy that morning but I still took the time to sit down with her on the camera. … She was disappointed we didn’t find it but at least I won’t get a bad review. It has nothing to do with washing clothes, or the Laundromat business at all, really.”

“(It says) that we’re fair, transparent and responsive,” says Cathy Neilley of her Spin Doctor Laundromat’s response strategy. “We want to show that we really want them to have a consistently good experience. That’s the sign of a good brand, and we want to be that.”

“We try to craft responses that let people know that that is not the way we run our business and we strive daily to avoid any issues like that,” says engineering manager Boyd Woodard, who owns three stores in Southern California. “It’s really crafting a message around care for the customers and the fact that we are striving to be better.”

“Our customer service philosophy, I like to call it, is the customer never pays twice,” says Bill Norteman, who co-owns four card-operated Laundromats in the Chicago suburbs with various partners. “I tell our people on day one that if something goes wrong, … it doesn’t matter even if it’s the customer’s fault, they never have to pay twice for the same washer or same dryer.”

“All of our attendants are empowered to make it right,” Marty Mullican, co-owner of the Owasso (Okla.) Express Laundry Center, says of a customer complaint. “Even if an attendant makes a mistake, we’re going to back that attendant, and then we’ll talk to the attendant later and say, ‘OK, if we had to do this over again, we wouldn’t do it that way.

“Every time we have a mistake, what we have in mind is the customer’s next visit. How do we address this issue so that they come back? … It’s all about getting that customer to return and to have them tell their friends: ‘You know what, this didn’t work right, but they fixed it.’”

And if the store owners interviewed were to offer an industry newcomer one tip about customer service, what would it be?

“It’s probably the most important thing to worry about, more so than (whether) every washer’s working,” Norteman says. “It should be at the top of your list of things to worry about.”

“Be as generous as you can, and don’t ever skimp on a refund,” says Barrett, who’s been known to mail a refund check in the amount of 50 cents.

“I’m going to quote back to what my dad would say to me: ‘Treat people as you would want to be treated, and always run a store better than me,” Sheeley says.

“Always put yourself in the mind of the customer, building a reason for them to return,” says Mullican.

“I think that every customer wants to know that the people running the business care about them,” says Woodard. “You’ve got to have that attitude to be consistent in your customer service, and you’ve got to pass that on to your attendants.”

“I would say embrace the joy of serving,” says Tyrone Akins, who co-owns four Laundry Cafés in Philadelphia with partners Brian Holland and Ray Chamberlin. “If you want to be successful in this business, you’ve got to serve before you can lead.”

Part 2: Connect with customers; in search of five-star reviews