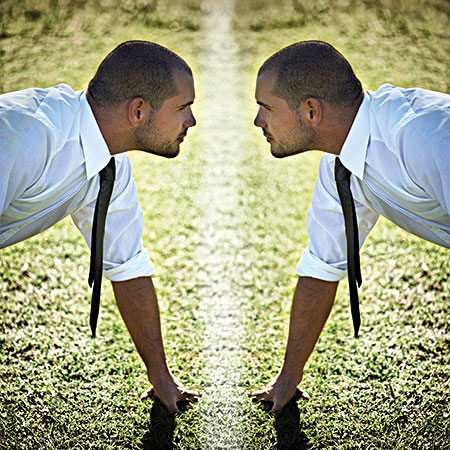 Whichever side of the line you’re on, it’s about best serving all customers

CHICAGO — The concept of adding commercial account work after opening your self-service laundry is well established in our industry, and many owners maintain such multi-faceted operations that boost their collective bottom lines.

But it’s important to understand how these two similar operations differ and how to best coordinate them when offering both so that one doesn’t impede the other. Whether it’s the walk-in customers standing in the next aisle over, or the commercial accounts whose representatives you may rarely see face to face, whichever side of the line you’re on, your goal should be to best serve your customers—all of them.

In a way, it’s about creating and maintaining a dual identity.

“The store wasn’t ramping up as quickly as I thought,” recalls Szczotka, who also owns retail and commercial drycleaning operations and a textile restoration company. “With my background on the drycleaning side, I figured I could very easily just bring some accounts in.

The facility housing both measures just shy of 3,500 square feet and boasts 38 washers (ranging in capacity from 20 to 75 pounds), 22 dryers (16 are stacks, the remainder are 75-pounders), and a flatwork ironer, all from Continental Girbau.

In Norwalk, Conn., roughly an hour northeast of New York City, Bjorn Wisecup is a co-owner of The Laundry Basket (self-service Laundromat) and LBN Linens (commercial laundry). Here, the two operations are in adjacent, connected buildings, with 2,800 square feet of space dedicated to the Laundromat and approximately 1,400 square feet dedicated to commercial linen processing.

The Laundromat turns 7 in March, and LBN Linens has been operating nearly six years.

“We started that pretty quickly after we started hiring attendants for the Laundromat, just to fill the void when they weren’t doing wash-dry-fold,” Wisecup says. “It was a great revenue-producing source because the employees were on salary and they weren’t always busy for 40 hours a week. The labor, which is one of the biggest expenses in the commercial (side), was already in place and built into the revenue model of the Laundromat itself.”

Wisecup says LBN Linens started small with gyms, salons, physical therapy centers, and a nursing home: “Very simple, easy stuff to do. It doesn’t really take a lot of chemicals to get sweat out of towels.”

He employs a staff of 10, including three part-timers. There is a plant manager responsible for processing and handling the commercial accounts, two attendants doing wash-dry-fold work, and everyone else works on the commercial side.

As his company embarked on handling commercial accounts, Wisecup says it was important to decide which accounts to take on based on their processing needs.

“They’re good, small accounts. If you do wash-dry-fold, you can squeeze a couple in and not fall behind too bad. Handling the medical stuff, we’ll leave that to the 100% dedicated linen companies that are properly set up and have the staff safeguards.”

Liz Snowdon is director of operations for Get Fresh Laundry, a 1,200-square-foot facility in Vancouver, B.C., that offers walk-in, commercial and other laundry services. For a decade, the company has processed goods for hotels, sports teams, massage clinics, shelters, bakeries, churches and other commercial accounts. The self-service and the commercial aspects of the business are “viewed and treated as separate entities,” she says.

The pursuit of commercial accounts was done “for the consistency of workflow,” adds Snowdon, who employs a staff of 12.

“It helps keep everybody busy and buzzing with things to do. (It) helps the customers feel more comfortable when they are dropping off their laundry, seeing all the work going on, which gives them a feeling that we know what we are doing. We then don’t just rely on walk-in customers, we have something to fall back on.”