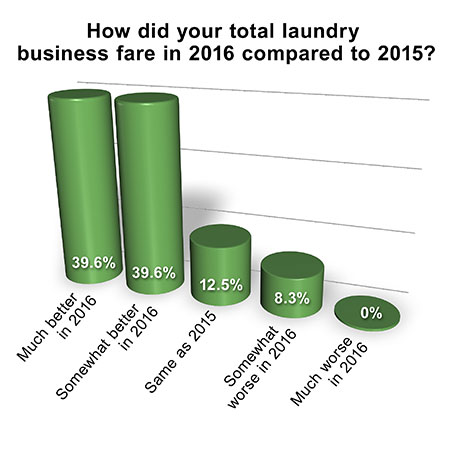 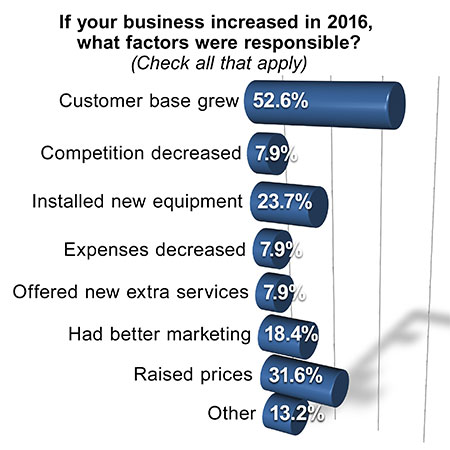 CHICAGO — Better than 79% of coin laundry store owners polled say that overall business was better for them in 2016 compared to the prior year, according to results from this quarter’s American Coin-Op Your Views survey.

Equal shares of 39.6% say their total laundry business performed “much better” or “somewhat better” than it did in 2015. Roughly 13% say that business last year was the “same as 2015.” A small percentage (8.3%) reported business being “somewhat worse in 2016,” and no one who took the survey described business as “much worse in 2016.”

Roughly 53% of store owners say that a “customer base increase” was one of the reasons why their business improved last year, while 31.6% attributed the improvement to “[raising] prices.” (Respondents were asked to select as many as applied from eight options.)

About 24% chalk up their improvement to “[installing] new equipment.” The boost was due to “better marketing,” say 18.4% of respondents. Equal shares (7.9%) point to decreasing expenses or offering new extra services.

Roughly 13% gave “other” reasons as to why they believe business improved, such as expanding their footprint or adding consistent commercial business.

Among those whose coin laundry business worsened last year, equal shares (33.3%) blame it on their customer base shrinking, expenses rising, or “other” reasons. (Again, respondents could select any from among a list of six factors.) One-quarter of respondents blame competition cutting into their business, and 16.7% say customers cut down on the number of visits they made. A small share (8.3%) say their extra-service income dropped.

What do you predict your store’s total sale volume will be in 2017? Among respondents, 61.7% forecast that it will “bounce slightly from 2016,” and 19.2% believe it will “improve substantially from 2016.” Roughly 13% project that it will “stay essentially unchanged,” while the remaining 6.4% expect to “experience (a) slight decline from 2016.”

While American Coin-Op’s Your Views survey presents a snapshot of store owners’ viewpoints at a particular moment, it is not scientific. Qualified subscribers to American Coin-Op e-mail blasts are invited to participate anonymously in a quarterly industry survey.