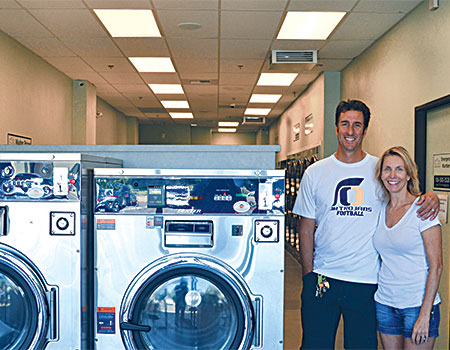 HAYWARD, Calif. — A few years ago, Rita and Greg Ferrero were pondering ways to make a living as they transitioned from corporate careers to retirement. It was about this time that fellow laundry owners Deborah and Jim Dower asked Greg to help them collect when they were out of town. That sparked a conversation about the laundry business and how it could be a lucrative stepping stone to retirement.

The Sacramento area couple each had long, successful careers as employees of large organizations: Rita worked in sales and sales management in the tech industry, and Greg was a 28-year veteran of the California Highway Patrol, most recently serving as a captain and commander coordinating state Department of Homeland Security intelligence, until he retired a few years ago.

Realizing a longstanding dream to partner in an entrepreneurial venture, the Ferreros bought their first Laundromat in 2014 in the northeast outskirts of Sacramento. Six months later, they bought and fully remodeled a second coin-operated laundry in nearby Citrus Heights. They recently completed construction of their third, brand-new store in Cameron Park, not far from their home. All three coin-ops are named Sierra Laundry.

The Ferreros started working with Western State Design (WSD) and laundry specialist Bryan Maxwell during the renovation of their second store, which had outdated décor and old, inefficient laundry equipment. Based on the Dowers’ recommendation, the Ferreros sought out Maxwell to help them figure out what type, size and mix of new, modern commercial laundry equipment they should acquire.

They ended up installing a full complement of top-rated Dexter Laundry front-loading washers and state-of-the art dryers. The equipment and the customer service they received from both Dexter and WSD made their decision to work with them again developing the third Laundromat a “no brainer.”

The Ferreros decided to build their third store from the ground up in Cameron Park because there were no Laundromats nearby. In fact, theirs is the only one in the 15-mile stretch between Folsom and Placerville. There had been a Laundromat about a half-mile away from where they ended up building their store, though it had shut down years before.

The couple didn’t like the location or the space there, so they decided to locate in a new shopping center in the area. “Our customers say they’re really pleased to have a brand-new Laundromat right in the neighborhood,” says Greg Ferrero.

About purchasing reversing dryers, Rita Ferrero says, “I approached the decision as a consumer, based on my own experience putting bulky items like sheets in larger dryers; they get all tangled up and don’t dry evenly, requiring extra drying time. I wanted to offer something to our customers that I would enjoy using myself.”

The Ferreros were among the earliest adopters of the DexterLive technology, having installed it in their second coin-op. Now also part of their third store, DexterLive is a cloud-based network that allows coin operators to monitor and control their laundry machines remotely—in real time. Not only can the Ferreros manage and troubleshoot their equipment from anywhere and respond to customer problems immediately, the network also provides up-to-the-minute reporting of items such as machine usage.

“I was pleasantly surprised—shocked, actually—to see how easy it was to install DexterLive in our new store,” exclaims Greg Ferrero. “I programmed 30 machines in 5-10 minutes.”

“It’s so user-friendly, my 12-year-old was able to help a customer restart a machine, using my iPad, while I was busy driving,” Rita Ferrero adds.

The Ferreros report that their customers are pleased with their new store, particularly the modern, large- capacity washers and dryers, and that business continues to grow as word spreads. Meanwhile, the couple is happy with the state-of-the-art laundry equipment that allows them to enjoy their semi-retirement life while running their business remotely.