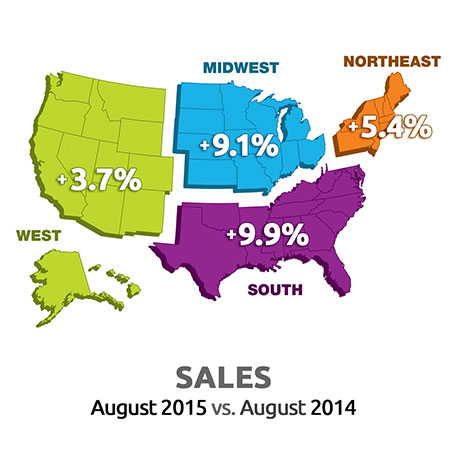 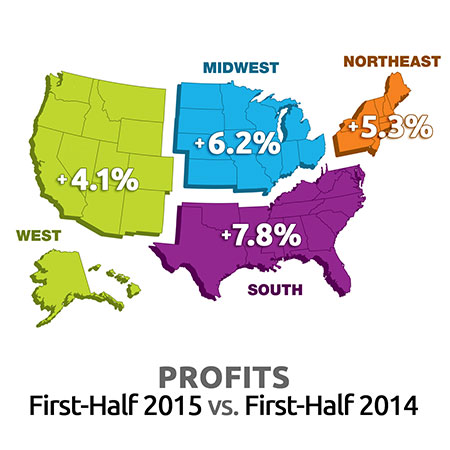 CHICAGO — August year-over-year sales for coin laundry operators in the South was up 9.9% on average, the largest increase reported among all regions, according to results of this month’s American Coin-Op StatShot survey. While that may seem extreme, operators in the Midwest tallied a 9.1% average increase, according to the unscientific poll.

“Business was much improved this summer,” writes one respondent from the South. “We had a lot of new customers, and as a result are putting in new and larger machines.”

Another respondent in the region replaced older equipment and is pleased with the results. “We replaced 80% of our old washers. One of them was a 50-pound [machine] and [it] was replaced for an 80-pound [model]. The results and savings are awesome.”

Elsewhere in the country, year-over-year sales for August were up an average of 5.4% in the Northeast and 3.7% in the West.

A respondent from the Northeast described his/her summer business as “Unusually strong. Usual summer drop-off in sales wasn’t as pronounced as in past years.”

“Slightly busier July than normal,” writes another. “Summer slowdown did not occur until August, when normal trends for summer season kicked in.”

In the West, positive comments were mixed with those lamenting the California water crisis, including mentions of water bills that had doubled or tripled.

“We are still not happy, although things are going in the right direction,” writes a Northeast respondent, “and our profits increased. We are still at near break-even or at a loss for 2015.”