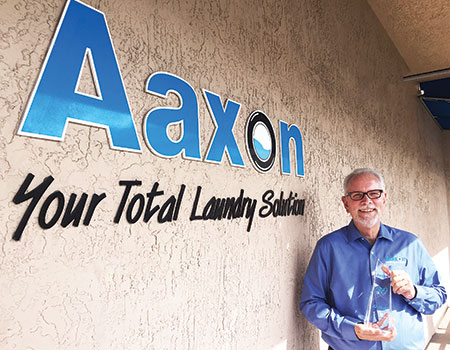 FT. LAUDERDALE, Fla. — Commercial laundry equipment distributor Aaxon Laundry Systems is honoring one of its own during a special anniversary this year. Edward Smith has been working in the laundry industry for 40 years, the last 22 of which have been as Aaxon’s senior vice president.

Prior to joining Aaxon, Smith led his own distribution business selling commercial laundry equipment to the coin and on-premises laundry segments.

Through his many years of experience, Smith has developed expertise in Laundromat site selection, design and lease negotiation, Aaxon says. He builds laundry projects with investors from the ground up and also advises current laundry owners on how to finance new equipment purchases and grow their businesses.

Additionally, Smith manages Aaxon’s sales team, overseeing the flow of contracts and installations in the company’s multi-housing division, as well as involvement in daily internal operations.

Smith admires the ability of his team to see the “big picture.”

“We all share the same big-picture goals,” he says. “There’s an incredible sense of camaraderie here. Everyone has a high esprit de corps.”

Smith adds that he looks forward to the free Laundry Service Schools that Aaxon offers throughout the year to laundry owners and service technicians in the South Florida area.

“I’m hoping attendees will walk away confident in tackling minor equipment repairs on their own,” says Smith. “Aaxon’s ultimate goal is to help laundry owners be self-sufficient, profitable and proficient.”

In addition to his business role, Smith is passionate about serving his community, where he has been chairman and director of The North Miami Beach Optimist Club’s Special Olympics for more than 30 years.

“The time and effort he has spent with the Special Olympics has been an inspiration for all of us,” says Frank D’Annunzio, Aaxon’s CEO.

Customer service and experience expert and best-selling author Shep Hyken advises how to de-escalate and work through conflicts with angry or difficult customers.