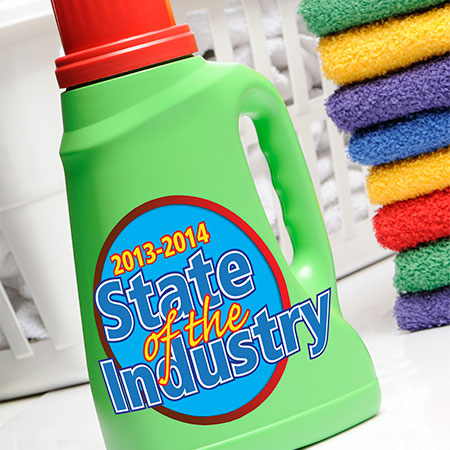 CHICAGO — Do you believe that your self-service laundry business compared favorably to others in the industry last year? Was 2013 a good year or a bad year for your store(s)? How does your pricing compare to others?

American Coin-Op’s annual State of the Industry survey offers you the opportunity to compare your operation to others in the industry. It focuses on 2013/2014 business conditions, pricing, equipment, common problems, turns per day, and utilities cost.

American Coin-Op asked respondents about their current washer prices, and if they increased prices this year or planned on doing so by the end of the year.

More than 76% of respondents offer top loaders. The price range for a top-load wash is $1 to $4.

Here are the most popular top-load prices, followed by the percentage of respondents using them:

There was a bit of a shake-up in top-loader prices from a year ago. The $2 price remains the most popular, but $1.50 moved back into the top three after a year away. There was also a tie for third place in last year’s survey, but it was between $2.25 and $2.50.

Some operators continue to charge $3 or more for a top-load wash, but the share that does appear to be small. This is the fourth straight year that top-load prices exceeding $3 have been reported.

The most popular prices for some of the small front loaders are:

The price range for a 30-pound wash is $2 to $6. Here are the most popular 30-pound prices, along with the percentages of respondents using them:

At 55 pounds, the clear winner in the competition for most popular was $6.

The operators who respond to our survey vary year to year, so prices tend to vary. But the survey consistently has shown that operators offer a wide variety of front loaders (prices for 13 different capacities were logged in this year’s survey) with a broad price range.

Thirty-eight percent of respondents have raised or plan to raise washer prices this year, and 29.6% are undecided. The remaining 32.4% have not raised prices nor intend to do so.

Here are the most popular dryer prices, followed by the percentage of respondents using them:

The top two prices remain the same from last year’s survey. Six minutes of drying time remains at No. 3, but is now sharing that spot with two other prices. The 25-for-10 price, which was once an industry staple, was well down the list of dryer prices reported in this year’s survey.

Once again, there was a wide variety of dryer prices reported. The most expensive (and longest) cycle was $2 for 32 minutes.

Roughly 13% of respondents have raised or plan to raise dryer prices this year, and 28.2% are undecided. The remaining 59.2% have not raised prices nor intend to do so.

Nearly 82% of respondents operate coin-only stores, 5.6% operate card-only stores, and 12.7% have operations that offer both payment types. The latter is up a few percentage points from last year’s survey.

The drop-off-service prices remain similar to 2013 prices, and there is a wide variety of prices charged for the service. There were 17 different prices charged per pound in the responses to our survey.

A little more than two-thirds of the respondents offer drop-off service, which tracks with last year’s survey.

We asked operators if they have already raised washer and/or dryer prices in 2014, or if they intend to do so before year’s end.

When asked why they had raised wash prices, or were planning to do so, many store owners pointed to higher costs, particularly in utilities. One owner believes his/her customers don’t mind higher prices, provided the operation looks to be worth them. “People don’t care how much [a laundry] costs if it is clean and well-maintained,” the store owner asserts. “Did you marry the cheapest girl you could find, or the prettiest one?”

Check back Monday for the conclusion: Equipment added in 2013, shopping in 2014, problem areas, turns per day, utilities cost, and 2014 business forecast!