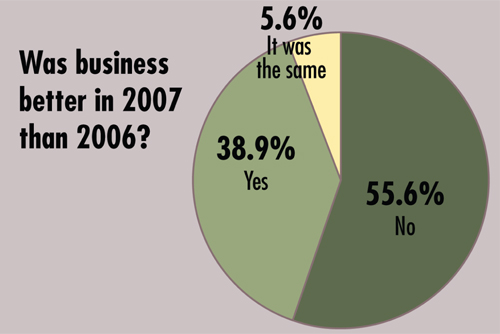 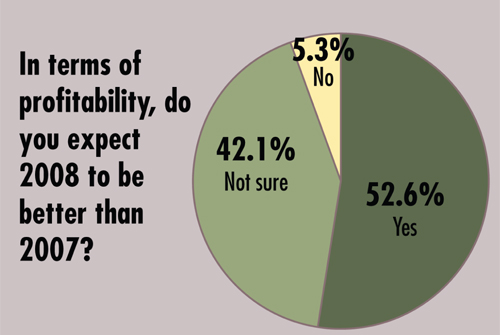 CHICAGO — Forty-two percent of operators say 2007 was a good year, in terms of profitability, for their coin laundry business, according to the most recent Wire survey. Thirty-two percent say business was “fair” in 2007 and 10.5% called 2007 a “below average” year. As for the extremes, five percent say business was excellent in 2007, while 10.5% say business was poor.When it comes to analyzing profitability, operator expectations always play a role. Forty-two percent of respondents say “business was better than I expected” in 2007. Other responses included “business was weaker than expected,” 31.6%; “business was just as I expected,” 21.1%; and “business was far weaker than expected,” 5.3%.More than half of the respondents (55.6%) say business was better in 2006 than 2007. Thirty-nine percent say business was better in 2007, and 5.5% say business was the same in 2006 as it was in 2007.Dealing with utility costs (36.8%) was the past year’s top challenge. In terms of the No. 2 challenge, attendant-related issues, finding the money to buy new equipment and a dwindling customer base all took in about the same number of votes.Sixty-three percent of respondents plan on making some changes to their stores in 2008. Thirty-seven percent aren’t sure if they are going to change anything.What changes are going to be made? Respondents were given a list of six changes, and were asked to check all the changes that they plan on making.The most popular change is “sprucing up the store (painting, cleaning, etc.).” Two-thirds of the respondents plan on doing a little sprucing up. The No. 2 change is adding new equipment (61.1%). Other results include “doing more marketing,” 50%; “raising prices,” 44.4%; and “adding new service(s),” 16.7%.