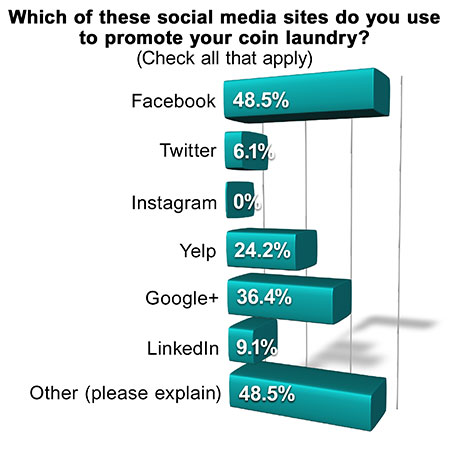 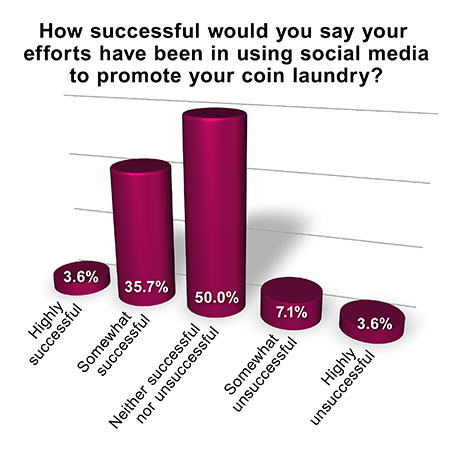 CHICAGO — More and more coin laundry store owners and operators are turning to social media sites to “promote store specials” (32.1%), according to results of this month’s American Coin-Op Your Views survey.

Operators were asked to select all the reasons they use social media, with others using various platforms to “alert customers of special events” (28.6%), “push extra-profit services” (17.9%), “share industry-related news” (10.7%), and “field customer questions/feedback” (7.1%).

Roughly 46% of operators say they use social media for “other” reasons, like posting general contact information, or so that new customers can find out more about their store.

“[We] e-mail or tweet washer specials during slack times,” says one respondent.

“We use social media as consumers and we do the same as owners because we know it works,” says another respondent. “We post once or twice a week on Facebook … It doesn’t matter if it’s relevant or just a funny photo.”

Another explained the way he/she keeps customers engaged on Facebook, saying, “We share a lot and [customers] love to see our improvements, follow our raffles [and know about] our holiday hours.”

No one who took the survey reported using Instagram to promote their coin laundry.

Despite their best efforts, an even 50% of respondents say they are “neither successful nor unsuccessful” in using social media to promote their coin laundry.

One respondent says that using social media is “overrated,” while another store owner says he/she prefers to “know my customers by face-to-face.”

Another says he/she has “mixed” feelings about it, adding, “Usually it provides a forum for competitors to put up false negative claims that you cannot combat.”

“I don't think it helps the bottom line too much, but it doesn’t hurt, and costs are minimal,” says another.