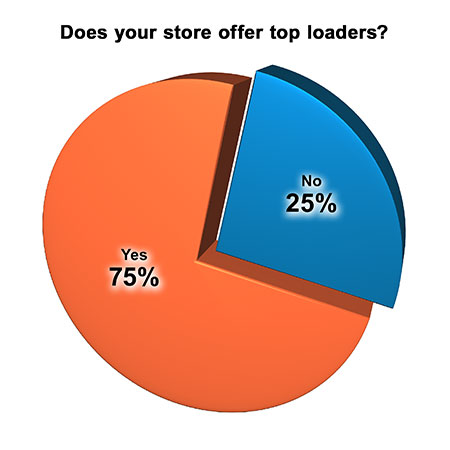 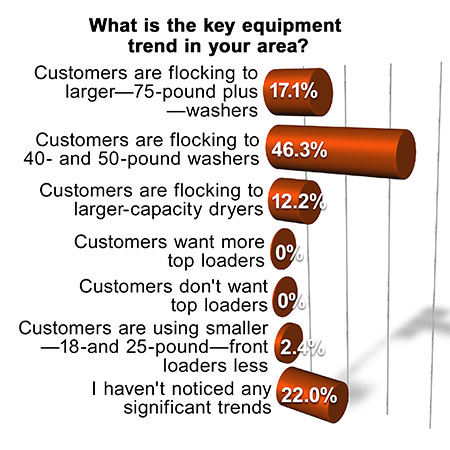 CHICAGO — More and more laundry customers are flocking to 40- and 50-pound-capacity washers, according to the majority (46.3%) of coin laundry owners surveyed in this month’s American Coin-Op Your Views survey.

While 22% of store owners say they “haven’t noticed any significant [equipment] trends,” 17.1% say customers in their area are “flocking to larger—75-pound plus—washers,” while 12.2% say their customers are also utilizing larger-capacity dryers.

Regarding the trend of top loaders, three-quarters of respondents say they offer top-loading machinery in their stores, while 25% say they do not.

While one respondent believes top loaders “will be history soon,” others begged to differ.

“While we hear everyone say [they are getting] rid of those top loaders, we have many customers—single people and elderly—that have such small loads [that] our top loaders are in demand,” one says.

“If there tends to be families … I would put larger-capacity machines. [With] college students, I would [install] 18-pound units because they don’t have that much [laundry],” says another.

While 7.5% listed “other” things they’d like to change about their store’s equipment mix, a small percentage (5%) are interested in adding small-capacity washers (18 to 25 pounds), while 20% say they “wouldn’t change a thing.”

The majority of laundry operators say they “seriously evaluate” their store’s equipment mix every year (43.9%), while even shares of 14.6% say they do this “every one to two years,” “every two to four years,” or that they “don’t evaluate” their mix at all.

Roughly 12% say they evaluate their equipment mix “every four to five” years.

The majority of store owners believe that staying abreast of customer needs is key to perfecting equipment mix.

“Don’t be afraid to ask questions of customers [and] why they use the machines they do, regardless of load size,” one respondent says.

“We watch and talk to our customers at every chance,” says another. “We listen to what our customers want, and the majority wins. We also educate them on the benefits of doing one large load for less money and much less time in the store.”