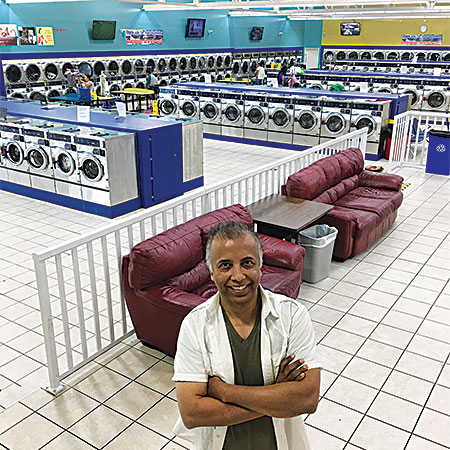 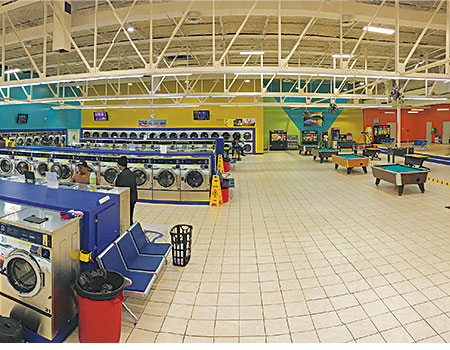 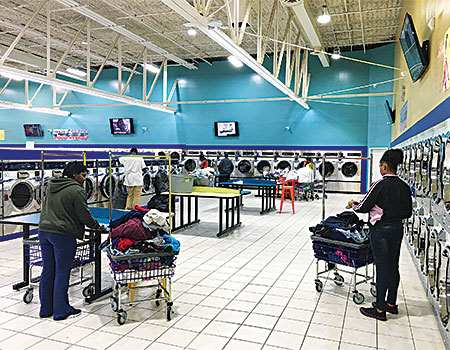 INDIANAPOLIS — First, it was Art “Smiley” Cormier and his namesake 340-machine coin-op in Denver dubbed the “Largest Discount Laundry in the World.” Then along came another city block-long goliath, the World’s Largest Laundromat, in Berwyn, Ill., which operator Tom Benson took to a new level.

While Cormier’s succumbed to neighborhood gentrification, nothing—not even a tragic fire—could knock Benson’s 13,500-square-foot, 304-unit behemoth in suburban Chicago off the top spot.

In an industry where success isn’t measured in poundage and space, it’s still notable when someone arrives on the scene with something enormous. Size may not matter, but it sure gave me a reason to return to Indianapolis and see Navil Manzur.

Manzur’s Indyland II Laundromat near the east beltway is a mind-boggling 18,000 square feet. Three hours north in neighboring Illinois, the total machine count at Benson’s operation is significantly higher, but this second venture for the Bangladesh-born entrepreneur is by no means light when it comes to iron on the floor.

That’s not all: Under the same roof of the one-acre structure is a 14,000-square-foot rental banquet hall and a soon-to-be-completed full-service, six-pump gas station with food mart and carryout chicken franchise.

To Manzur, all these numbers are just that — numbers. Constructing the biggest self-service laundry footprint to date wasn’t his goal.

“I wanted to build a Laundromat that was convenient for customers. That was my main target,” he emphasizes. “People don’t have to wait for washers or dryers, or bump into each other with their carts.”

Surveying coin-ops inside and outside the Indy market convinced him that enhancing the customer experience begins with addressing density.

“If there’s too many people in a small area, they don’t enjoy it,” Manzur observes of small and, in some cases, even large stores. Choked aisles, bumper car-like maneuvering of laundry carts, and restless kids turn laundry day into a stressful one, he adds.

His answer: a layout that affords families ample load capacity and luxurious amounts of elbow space.

During a recent Saturday afternoon visit — even with a headcount reaching 35 — Indyland II appeared relatively empty. It’s so enormous that you could fit the World’s Largest Laundromat inside and still have room for another 4,500-square-foot store. The coin-op, with its 22-foot-high exposed deck, is a sight to behold. And remarkably, the facility is overseen by a single attendant per shift.

With my wash load tumbling away, I catch up with manager Kimberly Lander wiping down machines. The cheery staffer, who worked at Manzur’s original Indyland location for a decade, has been keeping things humming at the new venue since it debuted in June 2015. Her smart watch logs 30,000 steps during a typical shift — that’s 15 miles a day traversing the aisles.

We soon depart the main floor for a quick tour of the back of the house where decorations are up and the DJ is performing a mic check for an evening wedding reception.

Later, I get a sneak peek at the full-service gas station taking shape at the east end of the structure — the third business to call home under the roof of the massive 44,000-square-foot complex.

Gasoline and wash water mix for Manzur. After emigrating to the United States from Bangladesh to attend school in New York, he relocated to Indianapolis in 2000 to open a gas station with his brother. Four years later, he built his first Indyland Laundromat from the ground up. The 10,000-square-foot coin-op, with its 150-machine lineup, is still going strong today, as are the pumps.

The opportunity for a hybrid operation came when the Indyland II property, a shuttered carpentry school, was purchased and redeveloped. The permitting process and buildout for the multi-function facility, most notably the banquet hall, went surprisingly smooth, thanks in large part to the prior occupant’s improvements, the operator says.

In the laundry section, there was a surprise of another sort. It turns out a bowling center pre-dated the school, leaving behind ball returns unearthed during excavation of 3,000 square feet of the 5-inch slab in preparation for the high-extract washer foundations. Manzur lined up his back-to-back washer bulkheads with the below-grade ball trenches to facilitate placement of drain lines and troughs.

“When I took the floor out, I saw the ball returns in the alleys and it worked perfect for me,” Manzur says. “I just made it a little deeper.”

Ample parking and a power door entry greet Indyland II patrons, who load carts and make their way along spacious open aisles of up to 14 feet. Five models of 200-G extract washers range from 20 to 90 pounds. Dryers ranging up to 80 pounds are laid out in an L-shaped configuration running perpendicular to the washer bulkheads and parallel to the back row of 60-pound washers. Two dozen folding tables, cushy seating, as well as the lion’s share of the venue’s 15 wall-mounted TVs are among the creature comforts on the main floor.