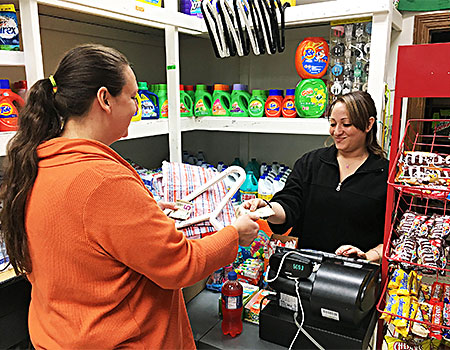 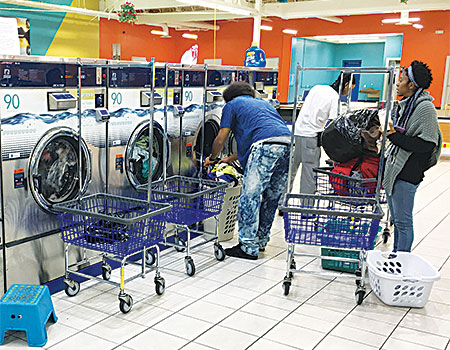 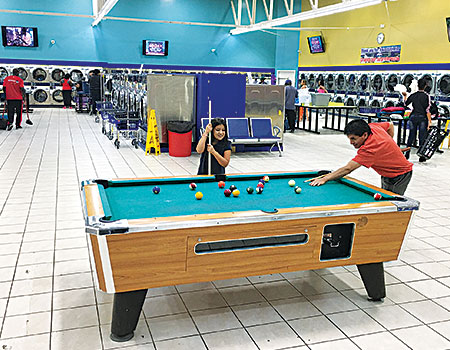 INDIANAPOLIS — In an industry where success isn’t measured in poundage and space, it’s still notable when someone arrives on the scene with something enormous. Size may not matter, but it sure gave me a reason to return here and see Navil Manzur.

Manzur’s Indyland II Laundromat near the east beltway is a mind-boggling 18,000 square feet. Three hours north in neighboring Illinois, the total machine count at Tom Benson’s World’s Largest Laundromat is significantly higher, but this second venture for the Bangladesh-born entrepreneur is by no means light when it comes to iron on the floor.

Five models of 200-G extract washers range from 20 to 90 pounds. Dryers ranging up to 80 pounds are laid out in an L-shaped configuration running perpendicular to the washer bulkheads and parallel to the back row of 60-pound washers. Two dozen folding tables, cushy seating, as well as the lion’s share of the venue’s 15 wall-mounted TVs are among the creature comforts on the main floor.

Off to the right of the laundry section is a slightly elevated section of the premises, easily accessed by a ramp or step-ups, where the laundry’s centralized transactional hub, recreation lounge and mini-convenience store are positioned.

Dozens of seats, four billiards tables, two foosball tables, along with an assortment of amusement devices are in close proximity of the transaction gateway.

In addition to a wall-mounted soap vender, Indyland II features its own mini-stop, where laundry products, snacks and impulse items are on display. With its glass storefront and counter facing out toward the laundry, the attendant on duty can ring up a sale while keeping an eye on the action from the front entry to the far reaches of the rear dryer wall.

Customer Alicia Perez pops into the c-store to pick up some clothes hangers while her son Samuel, 9, and daughter Sophia, 8, play foosball nearby.

“There’s always a lot of space and machines to use plus all the activities for my kids,” she says, adding that the roominess and diversions are welcome on family laundry day. “It’s spacious. You don’t feel closed in, and you’re not overheated inside here. It’s definitely less stressful.”

Just after noontime, the activity on the main floor ramps up just as the jukebox booms with Bruno Mars’ hit single, That’s What I Like. Over at the 50-pound stack tumblers, Lynn Wilson and niece DeAngel Laster are swaying to the beat as they fold up their $25 of weekly wash.

Wilson says she’s drawn to Indyland II by the plentiful big dryers and plenty to do to pass the time: “Play a couple of arcade games and listen to some music – it’s very nice.”

As the song ends, the sounds from the banquet hall begin to reverberate through the laundry.

Having all those wedding cakes cut on the other side of the coin-op’s wall was an afterthought.

The 22-foot deck extends from the laundry into the banquet facility, perfect for staging lighting and elaborate decorations. Manzur rents out the space, along with dining tables and chairs, and leaves the event planning and execution to the professionals. Bookings for Saturday evenings see the largest gatherings, requiring the attendant to monitor parking stalls closest to the store entry and occasionally directing partygoers to the 200 additional spaces at the side of the complex.

With the laundry and rental hall buzzing, the entrepreneur remains focused on seeing his vision of a coin-op/fuel station combo become a reality. Manzur is particularly interested in rolling out his Chester’s quick-serve franchised chicken outlet in the food mart.

“Two decades ago, people weren’t ready to buy chicken from a gas station,” he recalls. “They thought, ‘What are you doing, cooking with motor oil?’ We had to change the public’s perception and now most everyone has food in gas stations and promotes them as food marts. It wasn’t like that 20 years ago. They only pumped gas and sold cigarettes.”

The veteran operator notes that working off an 18,000-square-foot canvas afforded him the opportunity to design a self-service laundry layout benefitting end-users, staff and ownership. He points to the pairing of changers and bill exchanger capabilities, which automates all bill transactions and enables customers to focus on their wash and staff on their cleaning duties.

With staff productivity maximized and the tech-savvy operator availing himself of state-of-the-art machine monitoring from the convenience of his smartphone, the day-to-day ownership of such a large-scale laundry project blends seamlessly into his business portfolio, he adds.

Manzur remains bullish on the Indianapolis market, a mid-size metropolitan area that boasts its fair share of coin-ops over 4,000 square feet. His mega superstore operation draws wash patrons from up to 15 miles, he says.

But having the biggest footprint isn’t what motivates Manzur. To him, size doesn’t matter if his loyal base isn’t being properly catered to.

“The largest laundry doesn’t mean anything unless your customers are satisfied with what you have.”

If you missed Part I, you can read it HERE.