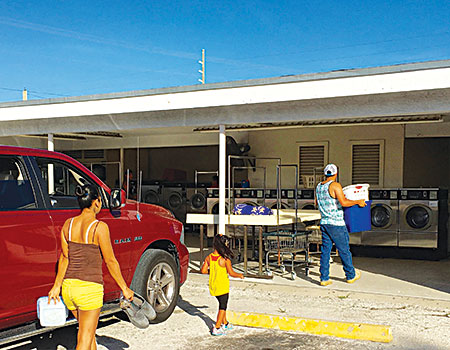 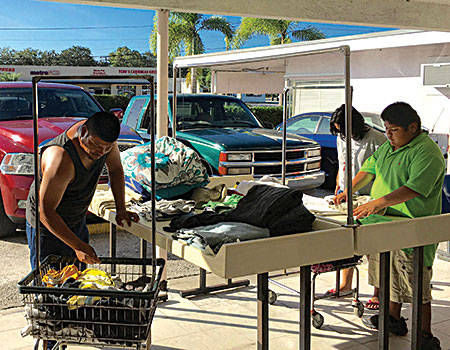 When the rain comes, it’s time to huddle and fold

VERO BEACH, Fla. — As cold winter winds begin to howl across the northern tier of the country, you can’t be faulted for being jealous of Reynolds Smith. His coin-op’s windows here don’t ice up, and snow never blocks the entryways. You see, Flamingo Laundry has neither storefront glass nor doors.

Open-air self-service laundries are almost as old as the industry itself. Their quirky design harkens back to the days of the clothesline when laundry was done where nature intended. The format became a fixture throughout the Sun Belt where there was no necessity to enclose the premises to shield it from the elements. Yet, over time, the concept fell out of favor as panes of glass were erected between the customer and the outside world.

While it’s easy to wax nostalgic for the open-air coin laundry and romanticize the past, there is no doubt as to the simplicity and convenience of this quintessential self-service model.

Flamingo’s southern exposure is impacted occasionally by heavy vertical rain. When the skies open up, the fiberglass seating units are pulled in and the safety cones and a floor squeegee come out. Customers take it all in stride.

“People huddle in the middle of the store and fold in the laundry carts,” attendant Cathy Thomas points out.

Sometimes, there’s more than just raindrops. The laundry survived — and even flourished — when back-to-back hurricanes struck Florida’s East Coast in 2004.

With both open-air stores located on major thoroughfares, the power held, and Smith quickly had customers queuing up to use machines. For two weeks straight, machines ran virtually non-stop except when the government’s mandatory overnight curfew kicked in.

“We were handing out numbers like you do in a deli,” he recalls of the deluge of patrons. The laundry owner and staff also lent a helping hand to storm-ravaged residents by offering potable water.

The only damage sustained at the two stores was some roof damage at his main Flamingo venue, which was temporarily patched with a tarp. Smith has since devised a hurricane action plan detailing preparations from tying down dryer doors to relocating furnishings and placing tape over coin mechanisms. Those measures were successfully implemented in October when Category 4 Hurricane Matthew skirted the Florida coastline.

The store veteran shrugs off the added maintenance that goes with a windowless laundry, citing the sturdy design of today’s equipment. Sun-bleached touch pads, a little more rust at the edges, and dust go with the territory, Smith points out, although he considers the round-the-clock exposure when it comes to design.

“We want to make the open-air 24-hour stores what I call ‘bulletproof’ — adapt it like you would any other public space.”

Incidents of crime and vandalism are “negligible,” according to Smith, with the last attempted break-in of a vending machine foiled by an alarm two years ago. Bright lighting, clear sight lines and cameras all contribute to maintaining security. The store is attended from 6:30 a.m. to 10 p.m.

Where his enclosed and open stores clearly stand apart is the cost associated with climate control — adding $2,000 - $3,000 per month when electricity, air-conditioning maintenance and unit replacement are factored in, the operator reports. It’s a high price to pay to keep both he and his patrons cool in the Florida heat. “I like working in an air-conditioned store and fixing machines; it’s more comfortable,” he grins.

Smith still gets a chuckle when vacationing snowbirds shake their heads in amazement at his airy laundry and reminds them of the rarity of a 30-degree temperature reading in the peninsula.

Installing a storefront on the 60-year old laundry is not even an option, given the loss of critical front parking stalls and the “hoops” Smith would have to jump through at city hall. He’s content with holding on to a piece of the industry’s ties to an earlier time.

“I’d say it’s past history, but it still works for us,” he says.

When asked if he would ever consider another open-storefront laundry, Smith quickly dismissed the notion.

“If we were going to do it all over again, we’d build an enclosed store,” he says. “People are used to air conditioning down here.”

He did, however, not completely shut the door to the concept — even if he had one to close: “Only if I was building a store in the Bahamas would it be open-air.”