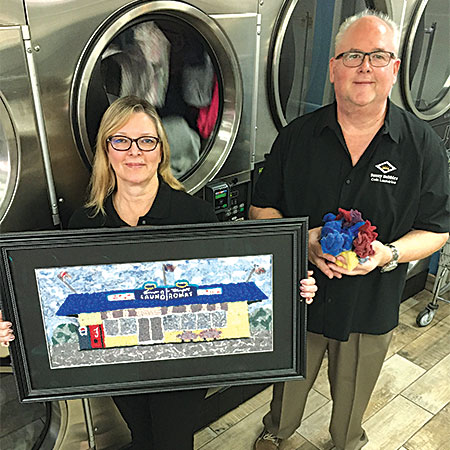 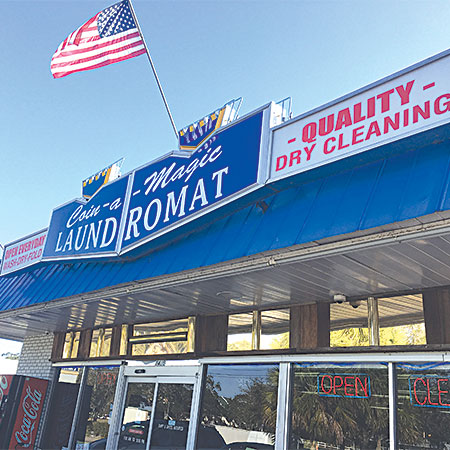 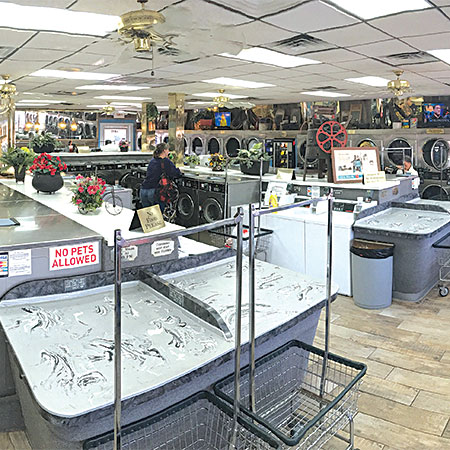 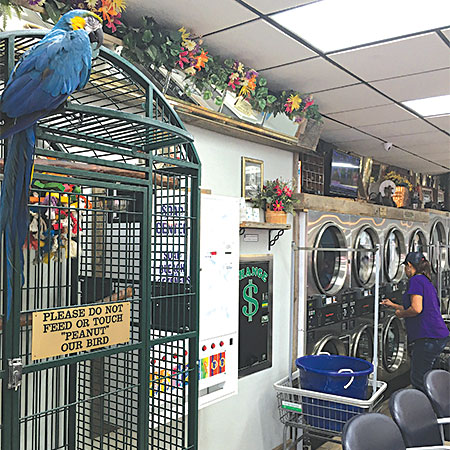 KISSIMMEE, Fla. — Take two Chicago siblings, hit the restart button in Florida, introduce an iconic laundry operator from back home, then toss in some dryer lint and a check for a hundred grand, and you’ll begin to understand where Bob and Donna Wallner have been. Call it kismet in Kissimmee.

This brother-sister duo teamed up in this city best known as a gateway to Disney and home to the largest rodeo east of the Mississippi. Mickey might have the Magic Kingdom around these parts, but the Wallners got Coin-a-Magic Laundromat.

Here, inside a rejuvenated vintage-era store, hangs a portrait symbolizing both the tapestry of a tightly woven coin-op community and the pair’s own odyssey — artwork that captured the $100,000 top prize last year in a Speed Queen-sponsored contest.

The pillowy storefront rendering — right down to the Pepsi machine’s red-white-and-blue logo — is made entirely of colorful dryer lint that Donna pieced together as a labor of love, cheered on by family and friends. Gaze at the fuzzy art and the picture of how she and her older brother found success in the industry comes into focus.

‘MY PARENTS THOUGHT I WAS NUTS’

For Bob Wallner, coin-ops held a special place ever since high school when he and a close pal would take time off from tinkering with race cars to stop in stores operated by his friend’s grandfather on Chicago’s North Side. There, he’d lend a hand fixing broken machines, take on a bearing job or two, and ride shotgun on collection days.

By age 25, he took his friendship to a partnership: “When I saw my buddy taking all the quarters out of the machines, all I kept thinking was, ‘I’m getting into this business.’ My parents thought I was nuts,” Bob, now 62, recalls.

Donna stayed close to the family’s commercial printing firm, working alongside their dad and becoming adept at business accounting and customer relations — skill sets that would play an even bigger role later.

With laundry pulling in some coin, Bob branched out to start a glass business. The glazier work offered a new discipline where he developed a critical eye for space planning and restoration.

Both embraced an entrepreneurial spirit growing up. As kids, Donna set up lemonade stands while her brother hawked sweets.

“At grammar school, I’d save my money and go out at lunch to buy candy at the store and sell it for double at school,” Bob remembers.

The two eventually got together when Bob’s coin-op family and his real one transitioned. By 2001, the aging patriarch of the joint laundry ventures was selling off stores. Over at the printing house, two generations were preparing to pull up stakes and begin a new life in Florida.

Still in his prime, the elder sibling was convinced that greener pastures laid ahead for he and his own wife amid palm trees. Bob scoured local newspaper business opportunity ads and spotted a coin-op listing in the Sunshine State. When he phoned, the person on the other end of the line was none other than the wife of George Fancher, the originator of the World’s Largest Laundromat in the Chicago suburb of Berwyn.

The couple, who had themselves cashed out and headed south, were putting out feelers back home for interested parties to purchase some laundry holdings they had acquired during semi-retirement. Bob came to know the renowned mega-store operator early on through his partners and the two quickly reconnected after a long hiatus.

Fancher had the perfect starting point: the 2,500-square-foot Coin-a-Magic in the heart of the state. But there was a wrinkle. Bob had loose ends to tie up in Chi-town and had Florida’s Gulf Coast — not its interior — on his radar. So he did what any big brother would do and asked his sister, who was packing up with their parents bound for Kissimmee, to be a partner.

Coin-a-Magic had undergone a rejuvenation and required minor tweaking to give it the Wallner touch. Donna admits running a coin-op as a novice in an unfamiliar market had a bit of a learning curve. The biggest challenge: handling over the counter bundles, a deviation from Chicago’s once-dominant self-service-only model.

With both settled down in different parts of the state and the lone Kissimmee coin-op building trade, the duo closed on a second of Fancher’s stores, this time on the western Gulf Coast.

Two other outposts — not under the Fancher franchise and located further down the gulf in North Fort Myers — were brought online, spreading holdings over a 200-mile stretch. “He wanted something to do closer to his house,” Donna chuckles, tracing the chain’s westward migration. “Once he drove home, it was me over here.”

They each assumed daily oversight for two stores and split the heavy lifting for all four, with Donna handling the paperwork and Bob carrying a toolbox. Strong kinship supported the long-distance clothesline.

“You know each other and can trust them. We can rely on each other and know how the other person works. We grew up together,” Donna stresses, before adding with a grin, “I know when he’s serious and when he’s goofing around.”