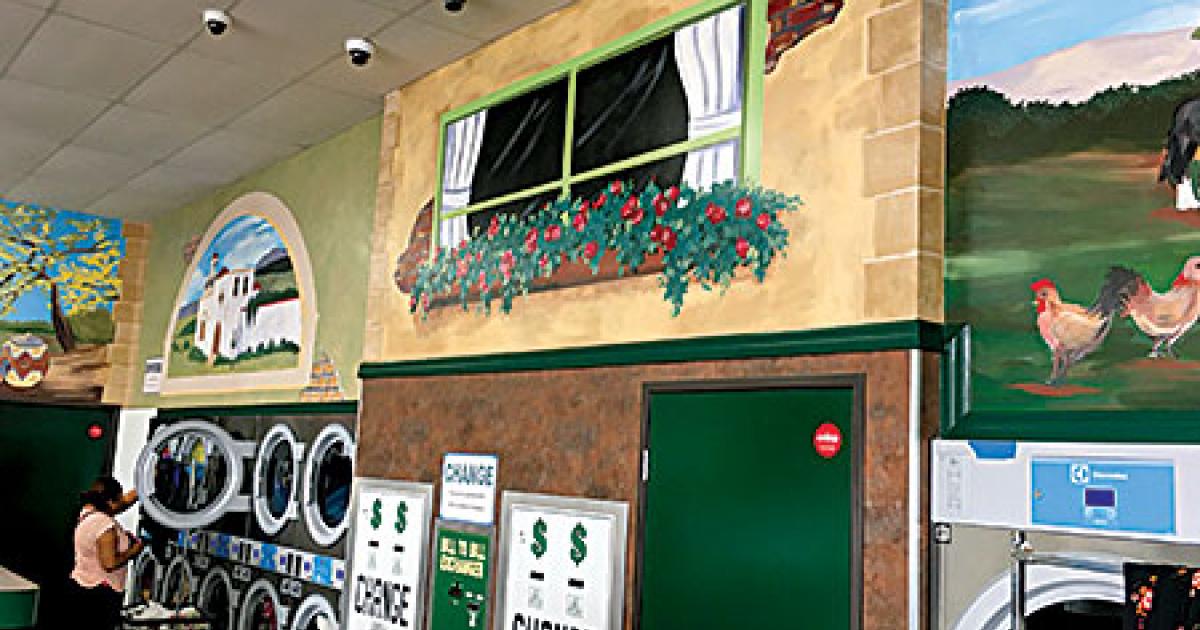 South Los Angeles store owner Henry Kim offered up the walls of his 24 Hour Coin Laundry as a blank canvas to a local artist to create a decorative backdrop featuring a window flower box and Spanish mission. (Photos by Laurance Cohen) 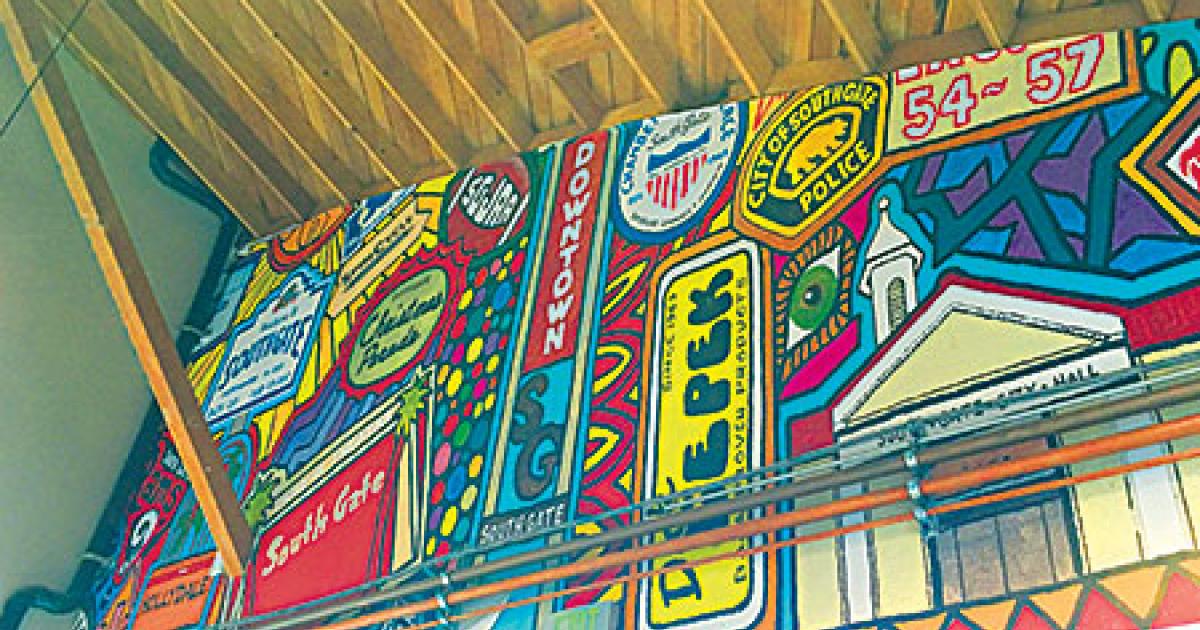 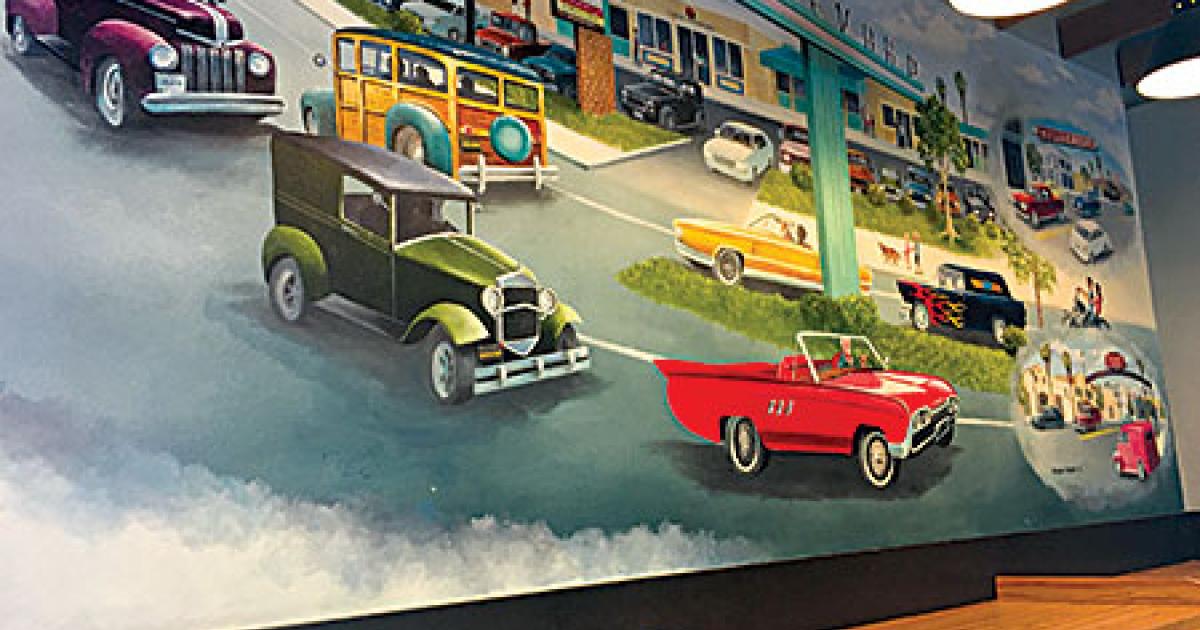 The modern shopping plaza housing The Laundry Room in San Diego serves as the focal point of a mural portraying generations of vehicles motoring along the famed El Cajon Boulevard. 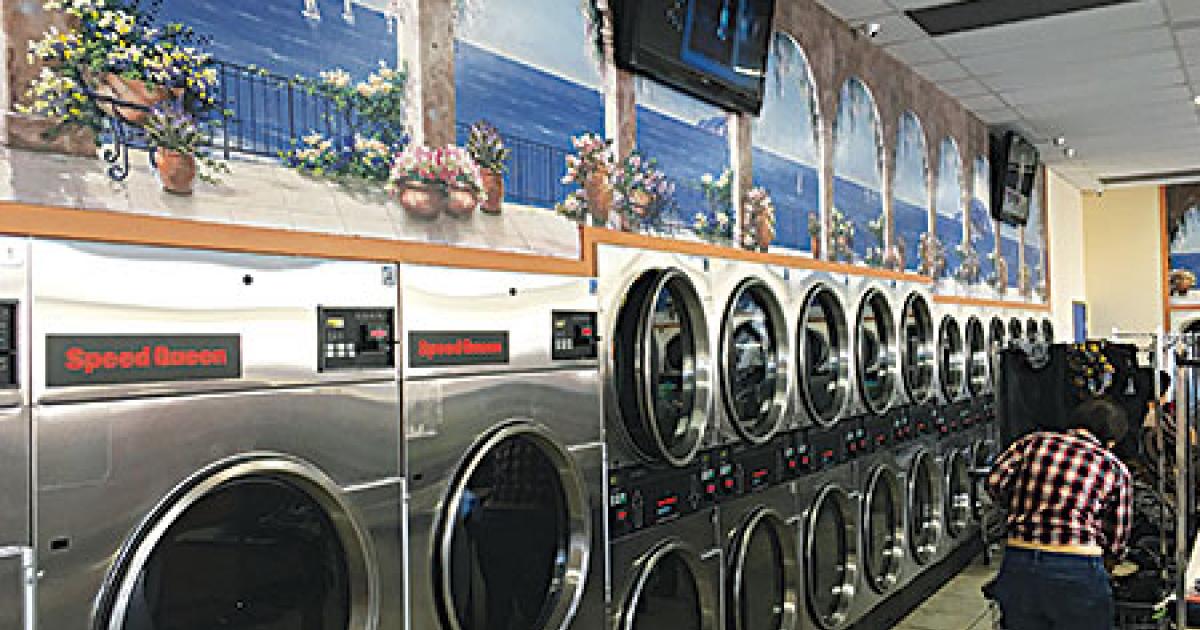 LOS ANGELES — Chances are you wouldn’t spend the bulk of your waking hours in Southern California visiting laundries. But if you’re “Goin’ with Cohen,” you bypass the beaches and skip the Hollywood Walk of Fame. The GPS is set for strip centers, not the Sunset Strip.

Seeking out coin-op hidden gems tucked away in the sun-drenched coastal counties of Los Angeles, Orange and San Diego is quite daunting. After all, we’re talking about a store roster that hits four digits spread across the nation’s second most populous metro area and its sprawling rival just north of the Mexican border.

One can’t spend time in Southern California without giving thought to the wall. No, not the border wall—the laundry wall. SoCal’s coin-op scene is awash with murals. The displays are dazzling, with many meticulously hand-painted while others employ custom-printed wallpaper as the medium.

When it comes to treating customers with wall treatments, there’s plenty of one-upmanship. Just when you think you’ve seen a jaw-dropper, another stops you in your tracks.

In South Los Angeles, operator Henry Kim turned the walls of his 24 Hour Coin Laundry over to a local artist as a blank canvas and gave him carte blanche to create a backdrop. The result: a serene countryside with horses and other farm animals, along with renderings of window flower boxes and a Spanish mission.

Kim says his largely Latino customer base appreciates the artistic touch: “They grew up with it and they’re very happy.”

The 92-washer, 80-dryer store on South Avalon Boulevard is in its second year of operation. Kim tells me that his other laundry in Orange County might receive strokes of the paint brush in the near future.

Bringing on local artists to enhance Southern California’s self-service scene is something not lost on legacy distributor PWS-The Laundry Company, as evidenced by the colorful displays at the SpinCycle Laundry Lounge, a working model showplace store adjacent to the firm’s main offices.

“Back when we bought the building, I was walking by the southern portion of the property and thought that a mural would really be a cool thing to give the building some character,” remarks Brad Steinberg, one of PWS’ co-presidents.

After admiring the work of muralist Don Lampkin, who had completed a project in neighboring Downey, Steinberg put his skills to work again.

“The mural showed off the history of the city and I thought it would be nice to do the same thing in South Gate,” he says.

Lampkin painted a smaller version of his depiction of iconic local institutions before toiling six weeks to carry it through to portions of the laundry’s entry and exterior. Today, the original painting hangs inside Steinberg’s residence.

Expressing civic pride through murals was also in evidence as I journeyed south to San Diego, stopping in at The Laundry Room in the University Heights neighborhood, where veteran owner Maurice Burrell commissioned a local artist to celebrate the community and capture the rejuvenation of the west end of one of California’s classic thoroughfares — El Cajon Boulevard.

As part of his store’s own makeover six years ago, Burrell brought in Clayton Parker to add vivid color to a wall with the artist’s interpretation of the portion of El Cajon where the coin-op calls home. Occupying prime space along the rear portion of the full-service laundry, the mural uses the modern shopping plaza as its focal point and portrays generations of vehicles motoring along the boulevard rich in history.

Burrell says the work contributes to the warm, inviting theme of the store by offering patrons a rare perspective of where University Heights once was and where it is now: “They will often gaze at it for a few minutes, just taking it in.”

Timing my visit over a weekend affords me a front-row seat to see laundries in San Diego and points south at full throttle. The two-day, 80-store route meant getting a jump on traffic and arriving at daybreak with the early-morning regulars.

Before much of National City’s Plaza Boulevard commercial corridor served its first customers, the handful of laundries on both sides of the 805 freeway were already on their second wave of incoming wash.

The occupied parking stalls outside Euclid Laundry early on this particular Sunday piqued my interest. Stepping through the doorway, I was immediately transported out of the Paradise Valley neighborhood to the Mediterranean coast. Archways framing unparalleled views along the Italian Riviera grace the perimeter of this 3,000-square-foot beauty. Owner Ed Levine sets me straight, saying the panorama was assembled with wallpaper.

My walk-through of the aisles housing 95 impeccably maintained washers and dryer pockets draws curious stares from a family tending to shirts pulled from the stainless steel tumblers. They inquire as to why I keep looking up at the walls and bumping into tables and carts.

“What, you’ve never seen people fold near the sea?” one of them cries out. I smile and nod.