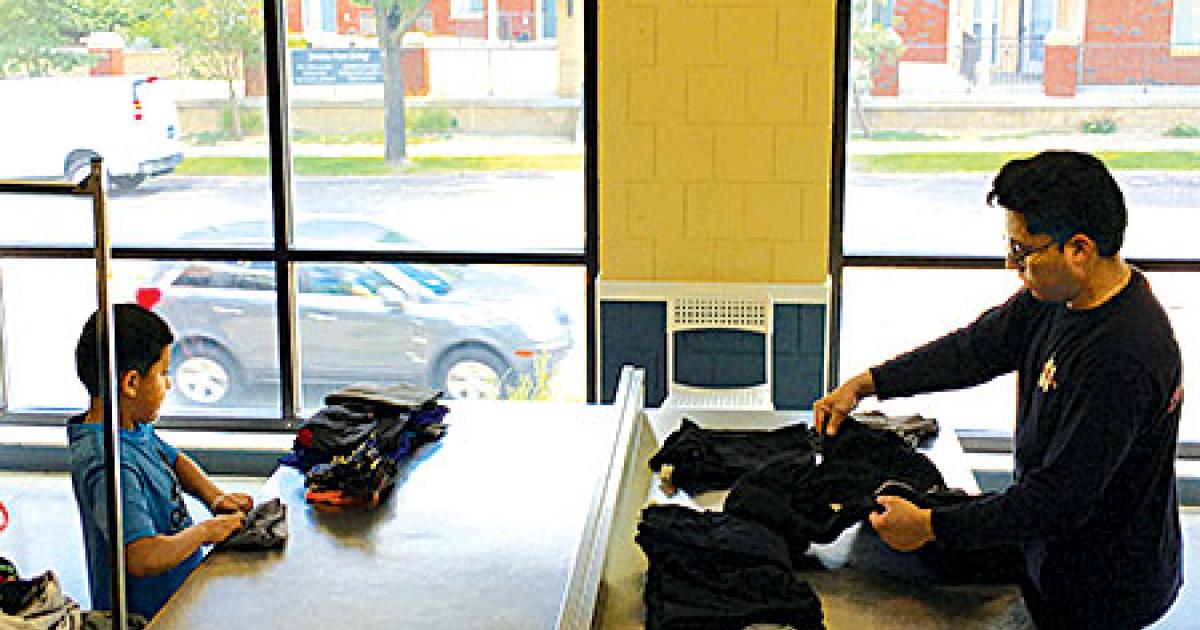 A father and son fold in the iWash Express to a backdrop of vehicles whisking along a stretch of St. Paul’s 7th Street. (Photos by Laurance Cohen) 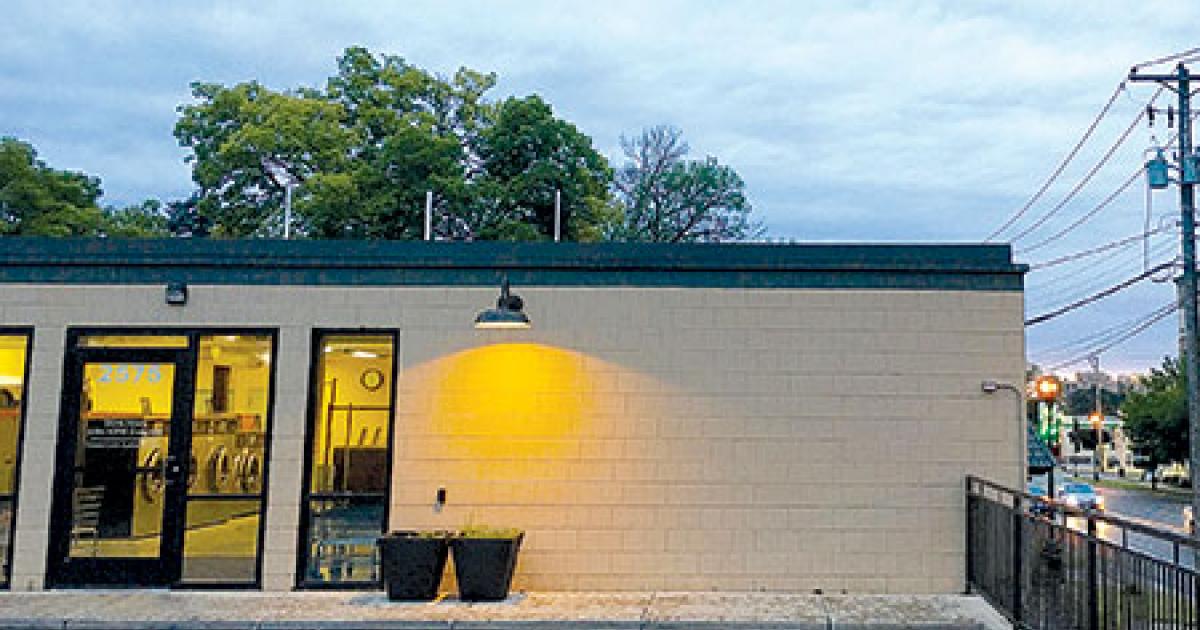 The 12-stall parking lot and main entryway is above-grade of the 7th Street arterial roadway and easily accessed from a side street. 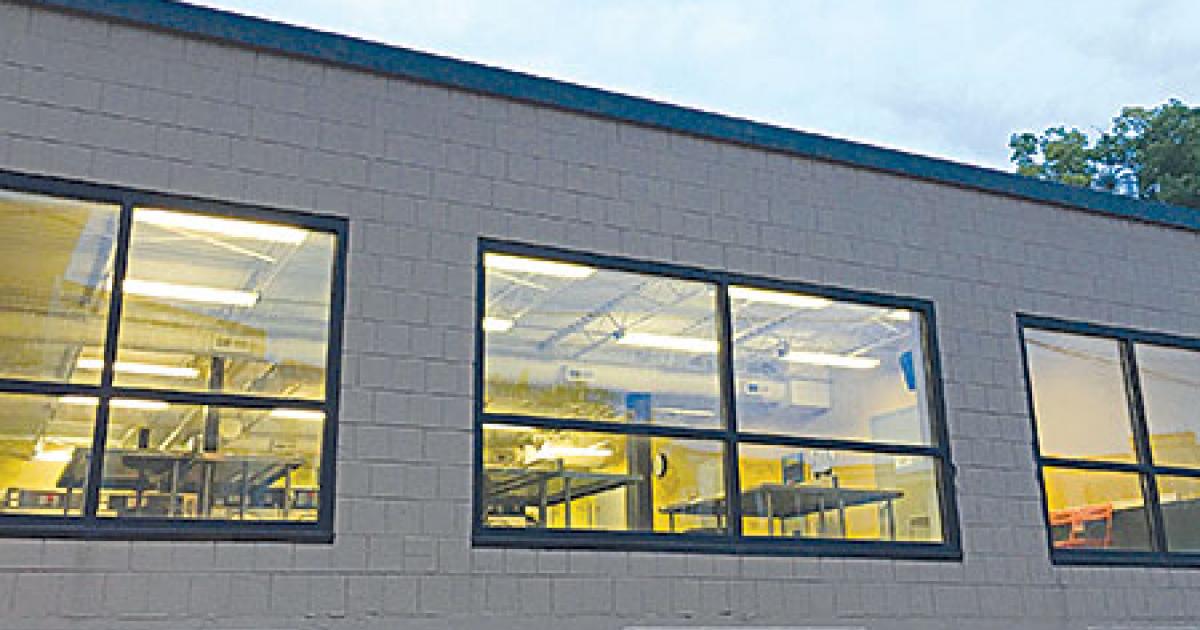 ST. PAUL, Minn. — The day Eric Swanson sought a permit to build out his first Minnesota coin-op, officials hinted the property might get caught up in a future redevelopment project. When a condemnation letter arrived five years later, the action didn’t exactly come as a complete surprise. But what was totally unexpected was the faith he placed in a former house of prayer to rebuild.

Finding a new home in the Twin Cities metroplex—a market the veteran owner describes as “pretty well built-out”—wasn’t as easy as throwing a dart at a map. With a drop-dead date looming to utilize a quarter-million dollars in compensation funds, the stakes grew each passing day.

“I wanted to be in an area where there weren’t a lot of laundries around,” Swanson says. “I wanted to find a niche spot where I could incorporate an office with the laundry.”

The seasoned general contractor was also a real estate licensee and relied on the Multiple Listing Service (MLS) for leads. After a couple of potential sites fell through, he found himself drawn to an unorthodox St. Paul property with an Orthodox history.

The building had most recently served as a Chabad-Lubavitch center, where faithful followers assembled for Judaic lectures, religious study and community events. A place of Torah service was being eyed for self-service.

Before possession of the premises was transferred, the remnants of its sacred past were removed, leaving behind walls and a low-hanging ceiling. Demolishing partitions and exposing the deck gave iWash Express Wash & Dry both ample space underfoot and overhead.

Large glass panes running along the street-side building’s face were added to bathe the premises with natural light and afford great sight lines to autos whizzing by below.

From painting the bar joists and deck to running mechanicals and laying a new slab, Swanson oversaw the building’s transformation from the site of Torah study to a textbook example of space utilization.

The store layout was constrained by structural elements that could not be altered. Four interior columns supported the roof, and one-third of the building had a basement. Code compliance dictated that dryer exhaust be vented a minimum of 10 feet from the property line. Swanson worked around the impediments while keeping an eye trained on maximizing throughput.

Greeting patrons within a few steps inside the front door are two back-to-back bulkheads set between the columns. One is lined with 10 20-pound washers, the other with 10 40-pounders and two trios of 55- and 75-pounders. A dryer wall, easily accessed at each end of the washer banks, houses eight 45-pound and seven 30-pound stacks.

The combined load capacity tops one ton, all of which is conveniently finished on stainless steel folding tables positioned near the expansive street-side windows and their unobstructed view of traffic flow below.

While funds from the eminent domain action were expended to ready the premises, both the new equipment package and a down payment on the purchase of the property came out of pocket.

The saga of a crosstown Twin Cities relocation is just the one chapter of Swanson’s growing passion for self-service laundry, one started across the state line in neighboring Wisconsin.

‘OWNS THE DIRT’ UNDER HIS STORES

Long before he turned to wash-and-dry, his focus was on residential real estate, making money “flipping before flipping was cool.” His market was greater Eau Claire, Wis., where he picked up bungalows and lake properties, renovated and resold them. The transition from flipping houses to collecting coins came with an eye toward his golden years.

“I wanted to own a building that I could use for retirement. I wanted a long-term tenant and wanted to control that tenant.”

He constructed his first coin-op 14 years ago in Altoona, just east of Eau Claire, by razing a house and building from the ground up. Six months after completion, he married and relocated to the Twin Cities and continued in the field of general contracting while increasing his roster of laundries on both sides of the border.

Swanson’s Brooklyn Park store was followed by two more back in the Wisconsin city of Menomonie, along the same Interstate 94 corridor as his first venue. His latest venue was constructed in Bloomington, south of the Minneapolis-St. Paul International Airport.

With his five laundry holdings spread over a 100-minute drive, Swanson relies on mixed dollar-coin and quarter changer payouts to reduce collection frequency. The format, he notes, maximizes hopper and money-vault capacity, as well as helps fend off draining by apartment dwellers seeking quarters to wash at home.

The multi-housing industry’s upgrading of laundry facilities is something not lost on the operator: “The ultimate challenge is to get customers to leave the apartment buildings and come to your location.”

At 2,500 square feet, the St. Paul iWash Express is the largest branch in the chain and serves as a model for his novel approach to what is often regarded as a cookie-cutter business.

Swanson says the local community has been supportive of the coin-op, including former Chabad members who once studied inside the facility and now patronize it on laundry day.

Down a flight of stairs between the main entry and the vending machine bank is a 900-square-foot, street-grade, lower level housing his Commercial Laundry Services distributorship, launched in 2013 to serve both vended and on-premise laundry markets. The space had previously served as an office for the rabbi’s sideline medical device enterprise.

Swanson is bullish on both urban and small-town coin-op markets.

“You can still do well in a rural area if you set it up right. You’re in and out quickly,” he says, pointing out that spare parts on the truck minimizes long-distance travel.

Whether it’s the Twin Cities or northwest Wisconsin, there’s one constant: This operator owns the dirt under his stores. And while Swanson was forced out from under one location, it wasn’t his swan song. He continues to reinvest in an industry that now occupies him full-time.

“I would not do a laundry if I could not own the building,” he states. “No one wants to split the pie. You want to make a profit, not just survive.”

If you missed Part 1 or Part 2, you can read them HERE or HERE.