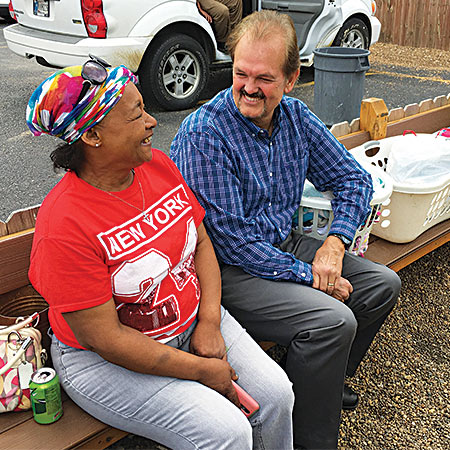 EVANSVILLE, Ind. — Forget about the “wash here, dry free” format. The same goes for grand openings where they give it all away for a week. You might as well throw in the so-called deep-discount charity coin-ops to boot. Here on Columbia Street, it’s the real deal: free wash, free dry, all the time.

If you thought not charging for loads would turn this self-proclaimed “Free For All” laundry into a chaotic free-for-all, don’t fret. Manager Don Clark has that all under control.

Just check in at his makeshift reception and sit tight until he waves you over to an assigned washer and dryer to load and reload until the job’s done without ever opening your wallet. Like the sign posted inside reads: “No Cash. No Coins. Leave your Money at Home.”

Can’t afford soap and bleach? Just pour what you need from the complimentary stock atop the bulkhead.

Welcome to the Jack Henry Gates Memorial Community Laundromat, where everything on offer is on the house — no questions asked.

Needing a wash but not a helping hand, I pull up to the nicely appointed Family Laundry. There, in stark contrast to the goings-on a block away, I’m one of two patrons during the better part of my late-morning visit.

How this all sits with Family Laundry’s owner is an eye-opener.

“Actually, it’s been a more positive impact than a negative impact that occurred. Truthfully, I thought it would close our business completely,” relates 10-year veteran operator Lonnie Pace in a phone interview.

While he admits self-service trade dipped, overall revenue is up.

“What really saves us is our wash-dry-fold services,” the operator says. Nowadays, more energy is channeled into a flourishing over-the-counter bundle service and less on resolving disputes that used to arise in the aisles among customers from all walks of life.

Pace says when it comes to attracting laundry customers, the intersection of East Columbia and North Governor streets where he and Gates set up shop has come full circle.

When Family Laundry debuted in 2007, the site to the west where the charitable operation now stands was one of a handful of coin-ops within a three-mile radius that were either closed or on their last legs. Pace’s new, state-of-the-art, full-service facility filled the void and “boomed” for the next five years, he says, pulling residents and factory workers from afar until competitors came back on the scene.

As Evansville caught wind of a freebie wash-and-dry, this otherwise unassuming neighborhood corner re-emerged as a laundry crossroads, drawing in trade once again from a wide perimeter, with Pace ready and well-equipped to serve.

The congestion, small capacity, and long waits across the way work to his advantage, Pace explains.

“Once they experience that environment and they find we have a Laundromat over here, they will come to us. A lot of people say, ‘I’m not going to do that again.’”

Welcoming the public to wash free of charge had a steep learning curve over at the Jack Henry Gates Memorial Community Laundromat.

While token handouts ensured personal interaction with those availing themselves of the gratis service, allowing patrons unlimited access to any and all machines had its consequences. Competition for small-load machines in a 900-square-foot customer area during the initial 7-hour operating window three days a week was fierce, as washers and dryers were commandeered at will.

“It was chaos,” recalls Clark, who came on board to help manage the store three months after its debut. To level the playing field, a one-patron, one-machine system was introduced, and refereeing turned into matchmaking with the store manager tasked with allocating washers and dryers. The new format improved throughput and eased tensions, he reports.

Last February, the nearly three-decade-old token-op units were replaced with banks of used, yet newer-vintage, proprietary card-operated route laundry machinery donated by an acquaintance of philanthropist and businessman Dennis Gates who was upgrading one of his accounts.

As gatekeeper, Clark pairs arriving customers with machines based on availability and steps away from the sign-in desk to manually activate washers and dryers using his cash-loaded manager’s card funded by Gates. Some patrons have their favorites and patiently wait their turn.

“You can take it or pass it,” he explains. “If you take the washer, you can use it as many times as you want and will get a dryer assigned to it.”

Hours were expanded to the current eight-hour, six-days-a-week operation, with doors open 9 a.m. to 4 p.m., Monday through Saturday. Gates says he never knew Sunday is traditionally a big laundry day for many, but nevertheless desires to set aside the day for faith.

Patrons arrive on foot or by car. Others wheel up on bicycles or toting all their worldly possessions in shopping carts, inspiring Gates to consider installing a combo bike rack and grocery cart corral.

Plans are also on the drawing board to enclose the rear courtyard to enhance folding and seating, as well as accommodate children’s activities and, possibly, a free hair-cutting station.

Gates also looks forward to another Thanksgiving Day event at the venue, where last year’s giveaway of 300 turkeys and 500 lunches packed the property.

Gates says his cell phone rings with words of gratitude from new job recipients able to put their best foot forward and apply for a position wearing clean clothes.

“I’d say 99% of the people who come in here need help. We’re all poor around here,” shares Clark, who was previously unemployed himself. “Some people come in wearing clothes, go in the bathroom, change, and wash the clothes on their back because that’s all they have. Others live paycheck to paycheck and can’t find money for laundry.

“The thing I do the most around here is say, ‘You’re welcome,’ because I get so many people saying, ‘Thank you.’ At the end of the day, I feel pretty good.”

If you missed earlier parts of the story, you can read them here: Part 1 — Part 2