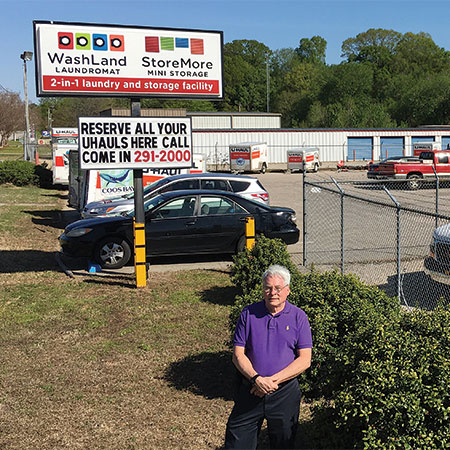 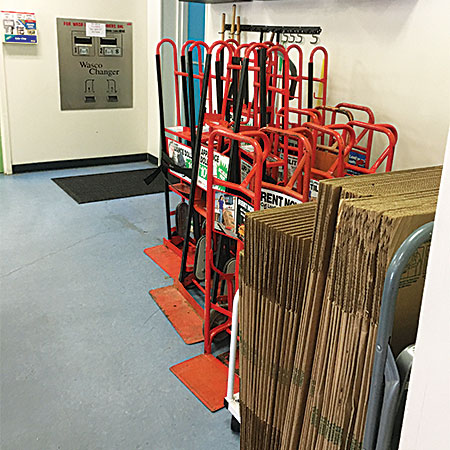 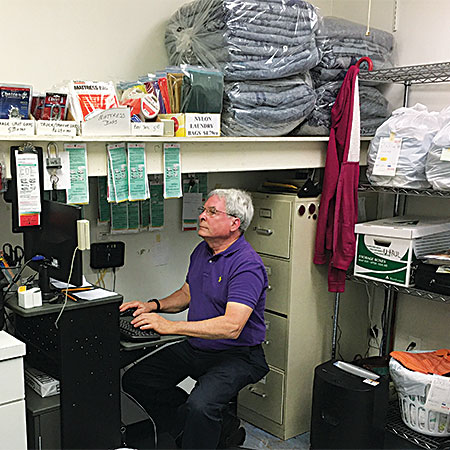 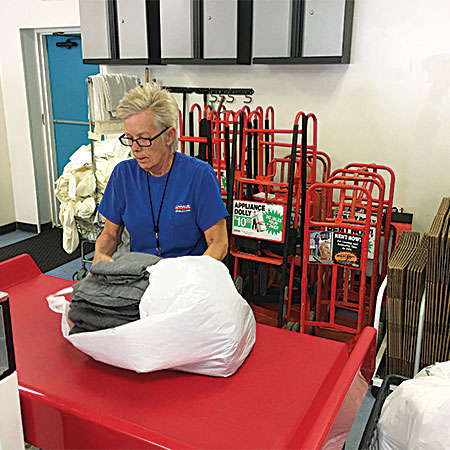 WILSON, N.C. — You might be surprised to learn what Yvette Morton Williams and Jerry Doliner are doing to drive sales. Their coin-ops are among a small group of hybrid operations dotting the map from Alaska to New York where you can buy time to use equipment on the floor and out in the lot. Washers and dryers, trucks and trailers — they’ve hitched up do-it-yourself moving to self-service laundry.

While it might seem a little far-fetched, consider that both business models rely on patron-supplied labor and each follows a familiar sequence: prep, load, run the load and unload.

With an estimated 40 million Americans relocating annually, and three out of four transients doing it themselves, some operators believe a sideline rental fleet is just the right move.

Here in Wilson, Doliner, a 35-year laundry industry veteran, oversees a trio of businesses where patrons can wash and dry in minutes, rent a truck or trailer for the day, and lease a storage unit month-to-month.

Sitting on 4.5 acres along the perimeter road of the city of 50,000 an hour’s drive from state capital Raleigh, WashLand Laundromat and StoreMore Mini Storage was purchased by Doliner 10 years ago after trading a life of five coin laundries and three cleaners plants for real estate investments. The prime frontage and unique two-in-one operation appealed to the entrepreneur, who could step into familiar shoes at the self-service coin-op and get his feet wet in self-storage.

Doliner spruced up the laundry and warehouse facilities, and while wash volume did dip slightly, it held its own with each sector contributing equally to the revenue stream. That all changed when U-Haul’s area field manager popped in two years ago and liked what he saw.

“Serendipity,” Doliner grins, recalling how the timely encounter turned around the fortunes of his operation. Impressed with the business model and ongoing support, he signed on and hit the ground running, just as the peak summer moving season was ramping up.

“I took in more absolute dollars in U-Haul after one month than the Laundromat did in 20 years. I knew I had to concentrate more on U-Haul.”

And he’s doing just that. Doliner plays up his rental location’s extended seven-day-a-week operating hours and on-site storage capabilities, both anchored by a fully staffed laundry. Beyond the convenience factor, the seasoned businessman and his team place an emphasis on upkeep. An impromptu inspection of a moving van confirmed that the crew doesn’t cut corners, they clean them.

Over the course of just 24 months, WashLand Laundromat and StoreMore Mini Storage has achieved recognition as a top-notch U-Haul dealership, says Doliner. The operator reports that one year in, his ranking — based on eight criteria linked to service level and customer reviews, not revenue — rose to the top spot in the region. And this past April, the venue tied for 39th place among the approximate 19,000 agents nationwide.

Patron satisfaction has translated into dollars. Doliner says U-Haul commissions, which are pegged to a sliding scale, have pulled even with receipts collected from his 54-machine coin-op.

Over-the-counter laundry service has ramped up, in part to bringing moving services into the fold. Attendant Barbara Dezern has witnessed the shift: “With storage and U-Haul, we have gained customers by them seeing what we do. Some people were just not familiar with drop-off service.”

Dezern, who has been “juggling” coin-op and mini-storage unit duties for eight years and U-Haul for two, gives priority to the trucks and will lock the office’s Dutch door, step off the floor, and accompany a customer to the vehicle to complete a transaction.

Staff members earn 10% of the value of each wash-dry-fold ticketed order they process, and share in a pool of 5% truck and trailer commissions based on hours worked.

Along the site perimeter, a row of the familiar orange-striped rentals are parked near an attention-getting pylon sign and reader board. The color-coded storage warehouse buildings run perpendicular to the outlot laundry, secured behind cyclone fencing and divided into 145 units ranging from 50 to 300 square feet at monthly rents of $48 to $120. Current occupancy, the owner reports, is running 90%.

Unlike self-service laundry’s prepay-to-play system, self-storage is all about receivables. Late fees on delinquent rent are imposed and, if necessary, Doliner turns to the legal process if a space goes unpaid after two months.

“Nationwide, the only way you can force people to pay is to threaten them with the auction,” he explains. “If they don’t pay, you can sell their stuff.”

Every other month, on a regularly scheduled Thursday afternoon, a core group of flea market stall operators and online resellers descend on WashLand and look on as liens on various storage units are enforced with a public sale.

As lien holder, Doliner can serve as auctioneer. The locks are cut, doors rolled open, and the contents sold to the highest bidder. “It’s almost like Storage Wars,” he laughs, referring to the long-running television reality series on A&E.

“I watched the series to hone my skills as an auctioneer,” Doliner reveals, quickly filling WashLand with his rhythmic chant: “Who’s got $20? 20, 20, 20!”

The auctions typically fail to cover the outstanding delinquency, the operator acknowledges. “The best unit I’ve ever sold out of here is probably not as good as the worst unit ever sold on the TV show.”