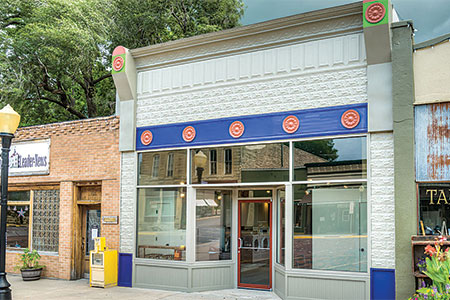 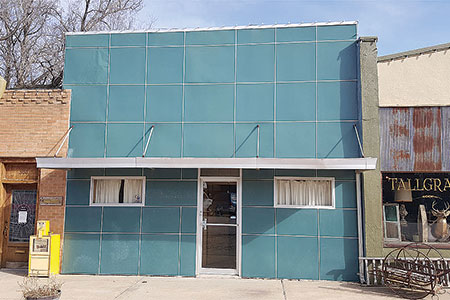 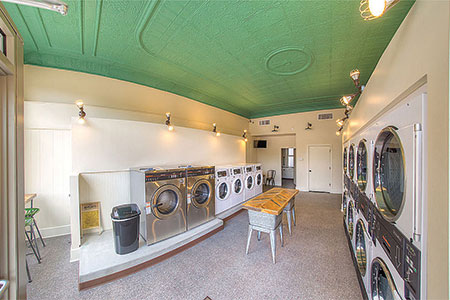 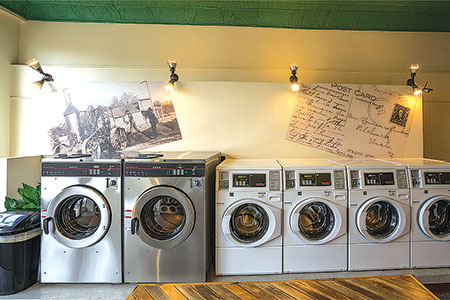 Wash-O-Rama preserves look of circa-1900 building

COTTONWOOD FALLS, Kan. — Use the buildings downtown first. That’s the unspoken rule in small towns in Kansas, where empty (and often historic) storefronts dot the main streets. And in Cottonwood Falls—a town of less than 900—that's just what the owners of the Wash-O-Rama Laundromat did.

“There was an economic need for a Laundromat [in Cottonwood Falls],” says Christy Davis, who opened Wash-O-Rama with her husband in 2016. As a board member of the Chase County Chamber of Commerce, Davis learned from surveys for a community development plan that Laundromats were few and far between in Kansas’ small towns, but were needed most.

Though the town is small, many properties have guest houses for tourists and visitors. Most, though, don’t have their own laundry facilities. Likewise, some of the townspeople don’t own washers and dryers either. A Laundromat in the town would have made all the difference. “I remember thinking, ‘somebody should do that,’” she says.

Davis has worked in the field of historic preservation for about 20 years. She was the Kansas Deputy SHPO and ran a preservation consulting firm. Currently, she serves as executive director of Symphony in the Flint Hills, which advocates for Kansas’ Flint Hills tallgrass prairie, one of the most endangered cultural landscapes in the country.

While Davis had completed numerous preservation projects in small, rural towns, she knew nothing about operating a Laundromat. But she did know about community development and the value of using old building stock in a place like Cottonwood Falls.

The building she chose could not have been more surprising. Located on the town’s main thoroughfare, the circa-1900 building had little remaining of its exterior architecture. A 1970s renovation replaced the original facade with large, square blue-green plastic tiles that were incongruous with the rest of the streetscape. The building, which was last used as an office, had drop ceilings and wood-paneled walls inside.

“I imagine there were people who didn’t see the potential,” Davis says, “but I’ve been doing this for a long time.”

Despite her experience with preservation projects, the Laundromat was going to be a standard remodel. But when The Larkin Company, the contractor for the Laundromat, removed the drop ceiling and revealed an intact pressed-tin ceiling, everything changed for Davis. “My little preservation heart melted.”

“That was a turning point in the project,” says Ben Moore of Ben Moore Studio, the architecture firm leading the renovation. “We shifted gears and looked at the historic photos.”

There weren’t many surviving historic photos, but they learned enough to design a sympathetic facade. And because the structure underwent many renovations that diminished—but didn’t eliminate—its historic integrity, the project qualified for the federal 10% Rehabilitation Tax Credit, which is available to commercial buildings built prior to 1936 that are not certified historic structures. (This is different from the federal Historic Tax Credit [HTC] that provides a 20% credit for rehabilitating non-residential historic structures listed on the National Register.)

The contractor framed Wash-O-Rama’s storefront windows with columns and a decorative lintel capped with a parapet, all made of pressed tin engineered to look like limestone. Moore worked with W.F. Norton, the company that produced the original tin, for the restoration. Inside, the sea-green tin ceiling adds a punch to the neutral walls, washers, and dryers.

The impact of the Laundromat on Cottonwood Falls has been greater than Davis could have imagined. Because it’s one of the only businesses in town open 24/7, there’s a lot of opportunity for it to be more than a Laundromat. Not only does it provide a much-needed service, it has also become a welcoming community center.

In June 2017, for example, the county hosted the popular Flint Hills Rodeo. The Davises held a “Bronco Brunch” in the Laundromat before the big event. The next month, Symphony in the Flint Hills hosted an opera workshop, so Davis held a “Soap Opera” pre-event reception at Wash-O-Rama. And when the Davises learned that the local food pantry is opened just once per month, they made room in the Laundromat for a small food pantry, so people could have greater access to needed supplies.

The project won the Kansas Preservation Alliance’s 2017 Merit Award for Excellence. Davis, at the ceremony, held up a roll of quarters. “If anyone can name a Laundromat anywhere that won a preservation award, I’ll give you this roll of quarters,” she said.

This wasn’t a smug statement. Few could have foreseen how a small-town Laundromat would become so much more than a place to do laundry, or that it would be so well supported.

“When you do a project in big cities, it’s a drop in a bucket," Davis notes. "When you invest in a small town—when you do one little project—it impacts the whole community."

“It’s always good when you have a client who understands preservation and the vision,” says Moore about Davis. “We were really lucky on this project.”

This article originally appeared on the website of the National Trust for Historic Preservation, SavingPlaces.org.

Meghan White is a historic preservationist and an assistant editor for Preservation magazine. She has a penchant for historic stables, absorbing stories of the past, and one day rehabilitating a Charleston single house.