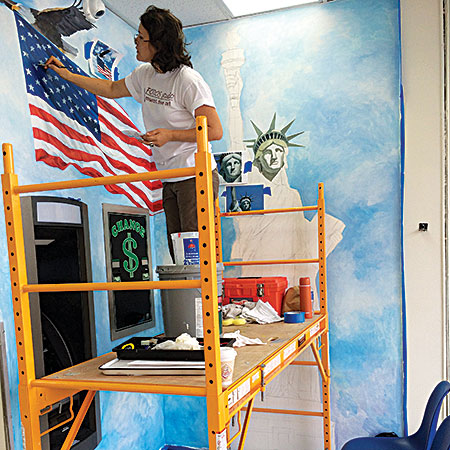 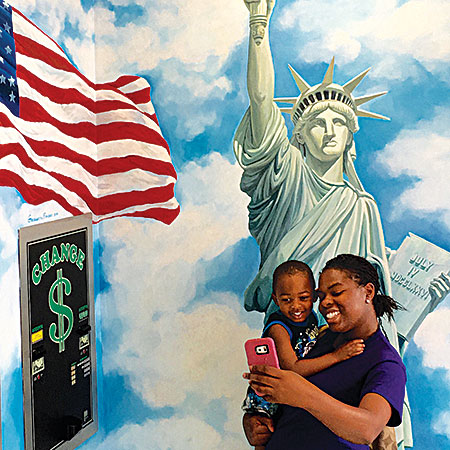 LAUDERDALE LAKES, Fla. — In southern Florida, a floor-to-ceiling hand-painted mural of Lady Liberty beckons the huddled masses of basket-toting patrons to step inside a patriotic-themed laundry.

Art in the coin-op is nothing new. Back in the ’70s when harvest gold top loaders and pastel tumblers were all the rage, retro laundry collages and framed serene landscape paintings offered weary customers a visual escape from the monotony of tumbling clothes. As white, almond and stainless steel machine panels ushered in today’s clean industrial look, brushes were taken to vanilla wall space to create ubiquitous cartoonish washers and whimsical bubbles.

Some coin-op owners have embraced art in such a way as to set themselves apart from the competition, draw in trade, and make laundry day an experience for the senses.

“I wanted something to tie into liberty and keep in line with the name of the laundry,” he says of his search two years ago to add a special touch to the 1,800-square-foot coin-op.

Soon, the white walls defining the cash-and-change dispensing area near the front entry were transformed into a thing of beauty, with a floor-to-ceiling hand-painted rendering of the Statue of Liberty complemented by a majestic bald eagle soaring through the skies carrying the Stars and Stripes in its beak.

“I liked Bill, and he had a brilliant idea. He’s a great patriot,” Fondos says. “He wanted the Statue of Liberty so the many immigrants using the laundry could feel the spirit and learn the history of the United States. He had a vision, and I respect that. I believe art in general can educate and enlighten the public.”

The mural garnered attention even before the laundry opened its doors to the public.

“People would come in or watch through the windows,” the artist remembers. “They are usually not exposed to the process. Everyone was curious and thrilled.”

Pederson says he hopes one day to add more murals to artistically display the U.S. Constitution and Bill of Rights before the eyes of his mostly Caribbean-born immigrant clientele. The genial owner enjoys striking up conversations with customers and their children, testing their knowledge of the significance of the Roman numeral date inscribed on Lady Liberty’s tablet, offering incentives for the correct response.

Two years on, he’s pleased with the buzz created by the work.

“Art adds character. Each laundry should have its own personality, and a nice mural lets you stand out from the crowd and helps them remember your name.”

Aadrina Cottrell and her 3-year-old son D.J. take time out after loading up dryers for a selfie photo-op in front of Lady Liberty.

“I like the decor and it’s befitting the laundry. It’s nice to see a balance,” she says. “Other laundries have signs telling you don’t do this and that.”

Glancing over from a table nearby is Angeline Joseph, who immigrated to the U.S. after the devastating 2010 Haiti earthquake.

“Someday I’d like to visit New York and see the real statue with my family,” she smiles. “For now, it’s good to look at her when I’m folding.”